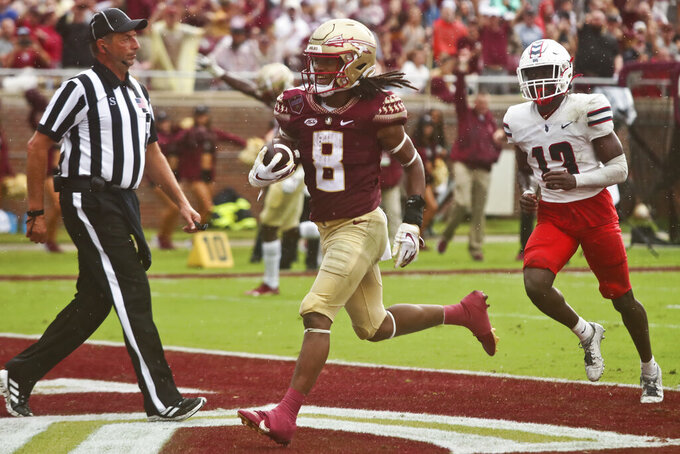 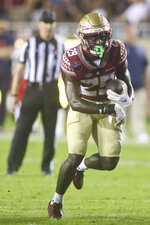 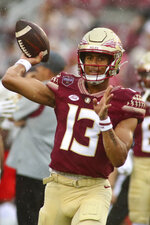 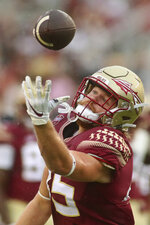 Florida State showed its offensive identity — running the ball at will — and dominated an FCS program.

Treshaun Ward, Trey Benson and Lawrance Toafili surpassed 100 rushing yards and Florida State dominated Duquesne 47-7 in a lightning-delayed game on Saturday. The Seminoles ran for 406 yards and opened the season with a victory for the first time since 2016.

“This was the first glimpse of the 2022 Florida State football team and I’m proud of our players,” Florida State coach Mike Norvell said. “It definitely wasn’t a perfect game. A lot of guys played, got opportunities. There was some good, some bad things that we’re going to have to continue to grow upon. But the experience and the approach is what I’m really pleased about. I thought we showed as a fast and physical football team.”

Florida State had shown it could be a run-oriented offense in Norvell’s first two seasons. But the Seminoles had three 100-yard rushers in a single game for the first time in school history, albeit in a game against an overmatched Duquesne.

“Before the game, this morning, we broke off on 500, because that’s what we wanted to get,” Ward said. “Just to see everyone get 100 yards makes me proud. And seeing Rodney score too made me proud as well. Seeing everybody get their burn and seeing everybody get their touches, it makes us proud. Nobody is selfish in this room. We want to see everybody eat and get to the next level. So it’s something in our room that no one else has.”

Florida State scored on eight of its first nine drives. Jordan Travis, Toafili and Ward had TD runs as Florida State led 20-0 after the first quarter.

Travis completed 11 of 15 passes for 207 yards. Kentron Poitier had four receptions for 84 yards. Mycah Pittman also had four catches for 44 yards. Johnny Wilson hauled in a 51-yard grab that set up a touchdown.

Joe Mischler completed a 22-yard touchdown pass to Abdul Janneh in the third quarter for Duquesne. The Dukes capitalized off a short field after Ryan Webb intercepted a pass from Florida State backup Tate Rodemaker.

A FIRST BUT WORK TO DO

Florida State had not won a season opener under Norvell. The Seminoles have started slow in his first two seasons and are a combined 0-6 in September in the Norvell Era.

Florida State: The Seminoles last surpassed 400 rushing yards in a game in 2016, when Dalvin Cook and Jacques Patrick led the team to 478 yards at South Florida.