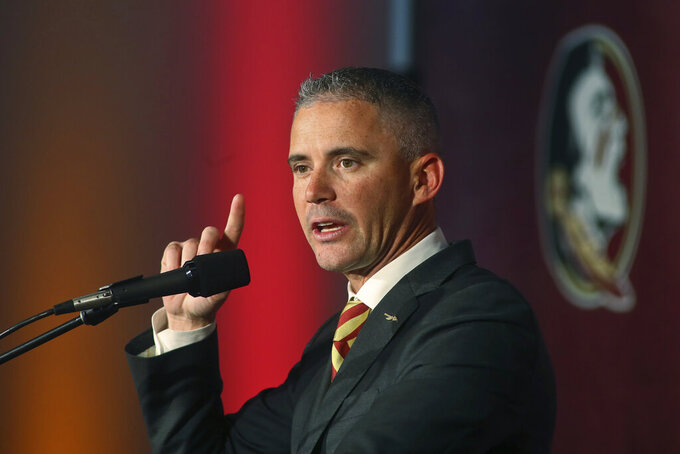 Florida State head football coach Mike Norvell speaks at a news conference Sunday, Dec. 8, 2019, in Tallahassee, Fla. Norvell is Florida State’s new coach, taking over a Seminoles program that has struggled while he was helping to build Memphis into a Group of Five power. (AP Photo/Phil Sears) 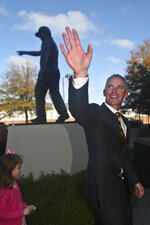 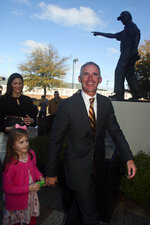 TALLAHASSEE, Fla. (AP) — Mike Norvell was the first coach Florida State interviewed for its football vacancy and though the search took school administrators around the country, they kept coming back to the man running Memphis’ program.

“We really liked him,” Florida State athletics director David Coburn said Sunday during a news conference to introduce Norvell. “The whole way. This guy wanted to be here. Of all the ones we talked to it was crystal clear with Mike that he wanted this job. And he had other opportunities.”

Norvell said he has idolized the Seminoles program since he was a youngster. He said as a 12-year-old growing up in Dallas, the first piece of college memorabilia on his wall was a 1993 Florida State national championship license plate.

“This is an incredible opportunity,” Norvell said. “There is a tradition of excellence here. There is a standard. Success is coming. There are great days ahead.”

Just a day after Norvell guided Memphis to the American Athletic Conference title, he was on a plane to Tallahassee and being introduced as the Seminoles’ 11th full-time coach, replacing Willie Taggart. The 38-year-old Norvell has agreed to a six-year deal and takes over a Seminoles program that has struggled while he was helping build Memphis into a Group of Five power with what annually was a top-10 offense.

Florida State is six years removed from a national championship and is in need of an overhaul. The program struggled late in the Jimbo Fisher’s era years and went 9-12 under Taggart — including a combined 0-3 mark vs. Florida and Miami before he was fired on Nov. 3.

“I want to be the coach that gets us back,” said Norvell, who after the news conference was introduced to Seminoles fans, along with wife Maria and 5-year-old daughter Mila, during the first half of Sunday’s Florida State-Clemson basketball game.

Though Florida State administrators reach out to other coaches during the search, university President John Thrasher said Norvell was the only person who was offered the job.

Norvell leaves Memphis having posted the highest winning percentage in Tigers’ history. He built on the foundation left by Justin Fuente when he left the Tigers for Virginia Tech and he led the Tigers to the first 12-win season in school history. Named Memphis’ head Dec. 4, 2015, Norvell won at least eight games in each of his four years here and reached double digits twice, including this year.

Memphis wrapped up its program-record 12th victory at the Liberty Bowl Memorial Stadium on Saturday in the American Athletic Conference championship win over Cincinnati.

He brought a creative approach to Memphis, where he called the bulk of the team’s plays even as he had a different coordinator each season.

Norvell’s offense became known for its explosiveness, leading to big plays. This season, the Tigers are 10th in the nation averaging 483.5 yards a game — 196.4 on the ground and 287.1 through the air — before Saturday’s championship game. His teams scored at least 2,147 points in less than four seasons — more than seven individual decades of Memphis football.

Thrasher said that Norvell’s name came up two years ago when Florida State was looking to replace Fisher, who departed for Texas A&M. The search in 2017 took less than a week. This time, Thrasher said officials wanted to “take our time.”

Florida State president said there is one distinct difference between Norvell and Taggart.