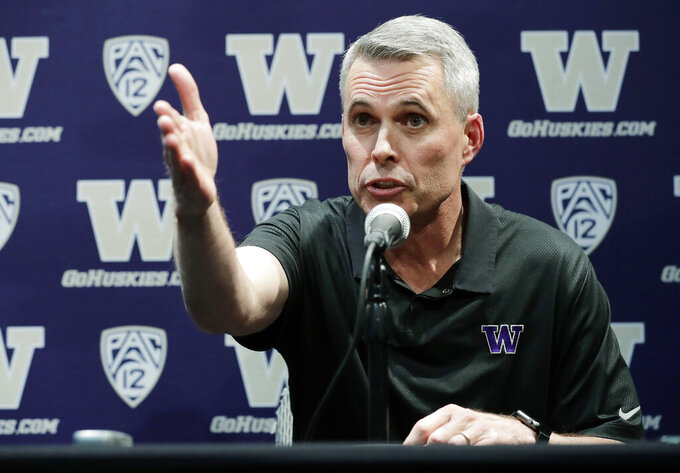 Florida State and Miami were hoping signing day could help put to the negativity of 2018 to rest and provide a push toward better times.

Coming off a 5-7 record in their first season under coach Willie Taggart, the Seminoles landed a top 20 class but struck out on a much-needed quarterback Wednesday

This is the second year for college football's early December signing period and it's made the traditional signing day in February something of an afterthought. More than 80 percent of the scholarships in FBS were scooped up in December, and the vast majority of the highly touted prospects were off the board.

Still, the usual suspects made some noise, especially in the Southeastern Conference. Alabama, which had already pretty much locked up another recruiting national title, had a couple of four-stars flip to other schools, but the Tide also pulled 330-pound defensive tackle Ishmael Sopsher out of Louisiana and away from LSU.

Georgia had the day's biggest surprise, getting five-star receiver George Pickens to drop his Auburn verbal commitment to sign with the Bulldogs.

Florida State didn't make that big of a splash, but the Seminoles held on to their commitments, including defensive end Quashon Fuller from Fort Myers, Florida. Nick Cross, a four-star defensive back from Maryland, put off his signing but didn't flip to another school.

The 'Noles bolstered an offensive line that desperately needed depth with three more signees on the offensive front. Taggart's class of 22 players has five offensive linemen, plus the 'Noles added a transfer from Northern Illinois.

Year one under Taggart produced the first bowl-less season at Florida State since 1981, and the Seminoles are trying to keep pace in their own division with national champion Clemson. Heading into his second season, Taggart is already facing pressure in Tallahassee.

"We've got young men here that believe in our vision and understand what we're trying to build," Taggart told reporters. "I think that's more important than anything."

The problem was at quarterback. Lance LeGendre selected Maryland over Florida State, leaving the Seminoles with no quarterbacks in the signing class and only one eligible on the roster this season in James Blackman. Deondre Francois was dismissed from the program last week. Taggart hopes Louisville transfer Jordan Travis will be granted a waiver to play immediately.

That could lead Florida State to look at the transfer database some more. Diaz has done plenty of work in that area.

The former 'Canes defensive coordinator and Miami native has re-energized a program that was looking bleak when Richt stepped down in January.

On signing day, the big adds from the high school ranks for Miami were cornerback Christian Williams, an Alabama product who was also considering the Crimson Tide, and quarterback Payton Matocha from Texas. Miami's recruiting class is likely to land in the upper 20s in the 247 Sports composite rankings, but transfers have a chance to make an immediate impact.

"We did not sit down and say, 'Let's go hunt these guys from other schools,'" Diaz told reporters. "We had to fix our roster."

Alabama will finish with the No. 1 class, according to 247 Sports' rankings, for the eighth time in nine seasons. ... A couple of highly touted signees have a Kyler Murray-type decision to make in the next few months. Jerrion Ealy, a five-star running back from Mississippi, picked Ole Miss after a late push from Clemson, but he is also a talented baseball player who could be drafted by Major League Baseball in the first round. LSU defensive back Maurice Hampton also is a top-notch baseball prospect who could take that route. ... Oregon had the top class in the Pac-12 locked down in December. On signing day, Washington moved into the second spot and top 20 overall, landing linebacker Daniel Heimuli from California. The Huskies ended up with nine of the top-50 players from California.