On Football: Could Coach Prime jump from SWAC to big-time? 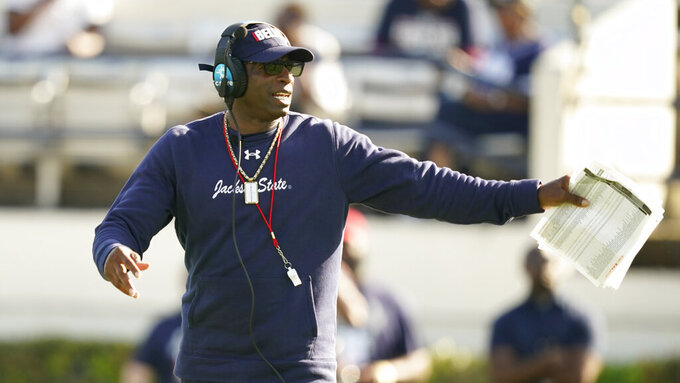 Coach Prime snagged his new offensive coordinator for Jackson State from Bulldogs coach Mike Leach's staff this offseason. On this day, Sanders had made the 90-minute drive to Starkville with a few other members of his staff to study how Mississippi State operates.

“I want to be great,” Sanders said the next day, back on campus at JSU. “So when I go to places like I went yesterday, that’s for me, too. That’s just not for my coaches. I want to see how this is run. I want to see how can I improve practice. I want to see what can I do different or where am I falling short, and I challenged myself to go to another level.”

Heading into the 2022 season, Sanders has emerged as maybe the most fascinating potential head-coaching candidate in college football.

Adding to the intrigue is the state of Sanders' old school. Once-mighty Florida State began Year 3 under coach Mike Norvell trying to snap a string of four straight losing seasons.

“I don’t look down the street that far. I dominate the moment, man,” Sanders told AP.

Just going from the second-tier of Division I football, where Jackson State competes, to the Bowl Subdivision is an increasingly rare move. Making the jump from an HBCU to FBS is even rarer and going from the SWAC to a Power Five school is unheard of.

Then again, Sanders, 55, has always been one-of-one.

Prime Time made cornerback a glamour position during his time at Florida State in the late 1980s. He played 10 years of Major League Baseball while simultaneously being one of the best players in the NFL throughout the 1990s.

“You don’t get to become considered the best, running with the rest,” Sanders said.

Sanders has discussed job openings with officials from at least three Power Five schools, including Florida State when it hired Norvell in 2019.

“Killed it. Nailed all the interviews,” Sanders said.

He impressed at least one athletic director enough that a preliminary conversation, done as a favor to Sanders' then-agent, led to a second, more formal interview.

Arkansas AD Hunter Yurachek said he went into his initial meeting with Sanders back in 2019 with no expectations.

At that time, Sanders was still coaching at a Dallas-area high school that he helped launch. His lack of experience was too much to overcome.

Still, Yurachek considered the potential impact Sanders could have on the recruiting trail in the SEC, trying to sway some of the most sought-after high school players in the country away from Alabama's Nick Saban and Georgia's Kirby Smart.

"Can the name Deion Sanders and his presence in the home of a young man be enticement enough for that young man to come here institution?" Yurachek asked himself.

Last December, Jackson State was the story of signing day when five-star cornerback Travis Hunter backed off a longtime commitment to Florida State in favor of Sanders and the Tigers. Then in February, JSU signed four-star receiver Kevin Coleman.

Sanders swooping in to swipe Florida State's top recruit was yet another stinging loss for beleaguered Seminoles fans.

Sanders concedes he had a falling out with Florida State after the Bobby Bowden and his longtime defensive coordinator, Mickey Andrews, were nudged into retirement by the school in 2009.

That's all behind him now. The Hunter situation was nothing personal.

“I ain’t got no quarrels with Florida State,” Sanders said. “Everything is competition. Travis didn’t belong to them.”

Could a return to Tallahassee be in Sanders' in the near future? It doesn't seem likely.

Norvell has strong support from athletic director Michael Alford, who extended the coach's contract after the 'Noles bounced back from an 0-4 start with a 5-3 finish in 2021.

Even a small step forward in 2022, should be enough for Florida State to stay the course. The Seminoles opened the season with an easy victory against Duquesne last week, but face a much stiffer test Sunday against LSU.

Florida State can't afford to be impatient with Norvell. The school is still paying off Willie Taggart's $14 million buyout, and another eight-figure payout to a fired coach would be difficult to absorb —especially with Florida State focused on improving outdated facilities and infrastructure.

“We just had to modernize our operation and show investments in the program,” Alford said.

Still, fans are more fickle than ever these days. There is a point — 4-8? 3-9? — where the question becomes: Will it cost more in fan and donor apathy to keep this coach than it does to fire him?

And does that calculation change if Coach Prime is still killing it at JSU?