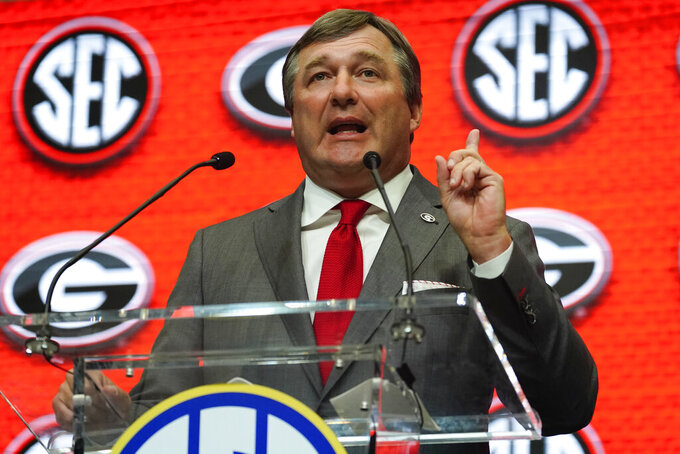 ATHENS, Ga. (AP) — Georgia's Kirby Smart has agreed to a contract extension through the 2031 season, a 10-year agreement worth more than $110 million that makes him the latest coach to land the type of megadeal that is becoming increasingly common in college football.

The deal announced Thursday has been expected for weeks.

Coming off a national championship season, Smart will be paid $10.25 million this season in base salary and supplemental compensation. He will receive raises each season, which lead to total compensation of $12.25 million in 2031.

The extension comes after Smart led the Bulldogs to Georgia's first national championship since 1980.

“Coach Smart’s impact on the University of Georgia extends far past his significant accolades as our head football coach,” athletic director Josh Brooks said in a statement. “He and his wife are Bulldogs through and through, and it is evident that Athens and UGA mean as much to him as he means to us.

"I am excited for our football program’s continued success under his direction. The future of Georgia football remains bright with coach Smart as its steadfast leader.”

The new deal came one day after Smart confirmed at the Southeastern Conference Media Days in Atlanta that he was close to an extension. He is 66-15 in six years at Georgia.

Smart receives a raise of more than $3 million for this season. He was set to earn $7.1 million on his old deal, which ran through the 2024 season.

Under Smart, Georgia has finished first in the SEC East four times and has won six bowl games. Georgia lost in the 2018 national championship game before finally breaking through with its win over Alabama in last season's title game.

Smart is a former Georgia defensive back.

“This is home for us, our roots run deep here,” Smart said. “My commitment to this university and our football program is unwavering. I’m thankful to President Jere Morehead and Josh Brooks for their continued support of Georgia football.”

Smart said he is “certainly proud of what we’ve been able to accomplish” but added "I’m confident the best is yet to come.”