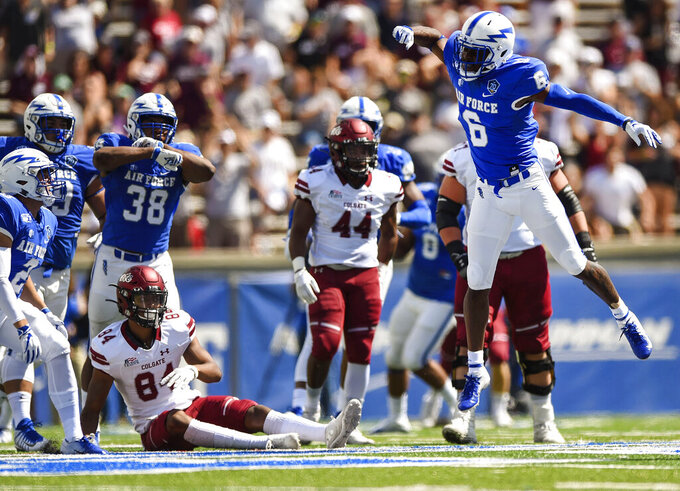 AIR FORCE ACADEMY, Colo. (AP) — Air Force was in no rush to pass. So the Falcons just rushed their way to a runaway win.

Donald Hammond III scored three of Air Force's seven rushing touchdowns and the Falcons ran their record to 24-0 against teams from the Football Championship Subdivision by beating Colgate 48-7 on Saturday.

Kadin Remsberg added two scores for Air Force, which moved to 13-0 in season openers under coach Troy Calhoun. The Falcons didn't throw a pass until the third quarter — their only attempt of the game. There was no need to air it out as they amassed 423 yards on the ground. Fullback Taven Birdow gained 80 yards to lead a balanced rushing attack.

"We were more physical than them. They weren't ready for us to be physical with them," Hammond said. "They were playing kind of soft so we shoved it down their throat."

With lightning in the area at halftime, the crowd was encouraged to head to their cars and wait out the approximately 30-minute delay. Many didn't return with the score already 35-0.

Air Force's defense did its part with an interception, fumble recovery, two sacks and a fourth-down stop. It all added up to a long afternoon for Colgate (0-2), the preseason pick to win the Patriot League. Quarterback Grant Breneman and the Raiders avoided a shutout late in the third when Breneman found Nick Gill for a 13-yard score.

A play that typified the day for Colgate was late in the first half when the ball was snapped over the head of Breneman and recovered by Air Force linebacker Lakota Wills. Hammond scored on the next play from a yard out to give the Falcons a commanding 35-0 lead.

"It felt like we were really in control of the situation the whole game," Remsberg said.

The Raiders could never get on track after throwing an interception on their first possession.

Hammond matched a career high with three rushing TDs. He won the QB battle over Isaiah Sanders, who took over in the third quarter and completed the only pass — a 41-yard strike to Geraud Sanders. Reserve QBs Mike Schmidt, Jake Smith and Zachary Larrier also got time under center.

It was the first time the Falcons registered just one pass attempt in a game. They've had five contests where they attempted no passes, with the last occasion being 2012 against Hawaii.

"Our intent was not to keep anything close to the vest," Calhoun said. "We had everything at our disposal and prepared that way."

Colgate: The Raiders start the season 0-2 for the first time since 2015. They began 0-3 that year before turning it around and advancing to the quarterfinals of the FCS playoffs.

Air Force: Two seems to be a magic number for the Falcons. The team is 19-3 since 2014 when they produce two or more defensive turnovers.

It was Bugg's first interception at the Academy.

"Feels great to make an impact for my team," Bugg said.

Calhoun's Air Force teams have won the season opener by an average margin of 37.9 points. The Falcons beat Colgate 38-13 in 2013.

As far as opening games go, anything more he could have asked from his team?

"Is there going to be ice cream on top of the apple pie?" Calhoun cracked.

BIG KIDS ON THE BLOCK

Colgate: Bye week before traveling to William & Mary on Sept. 14.

Air Force: After a bye week, the Falcons travel to Boulder, Colorado, on Sept. 14 to face the Buffaloes for the first time 1974. Colorado leads the all-time series 12-4.