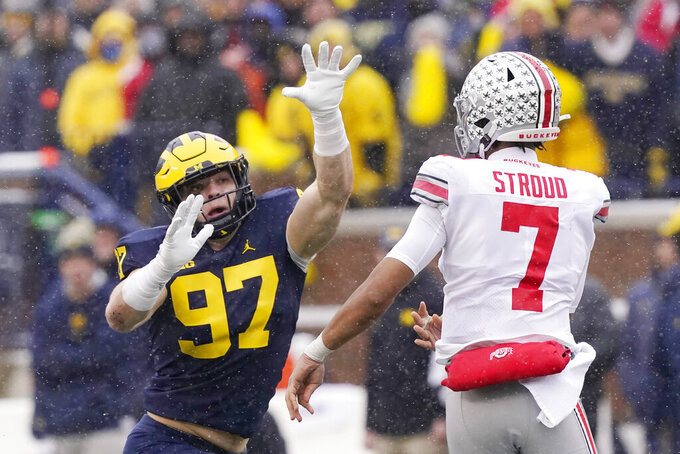 The Heisman will be presented Saturday in New York, returning to its usual routine and date — second Saturday in December — after it was forced to delay and go virtual last year due to the pandemic.

There are some changes this year. The site of the presentation is moving from a theater in Midtown Manhattan, near Times Square, to a smaller venue on the West Side near Lincoln Center.

The process by which Heisman finalists are determined has also been modified. The Heisman Trust announced that starting with this season, there will be four finalists — no more, no fewer — invited to the award presentation ceremony.

In the past the Heisman has invited at least three and as many as six players to the presentation. The number was determined by distribution of vote, with the cut-off decided by the gap between vote-getters.

After a 2021 season in which a Heisman front-runner took a while to emerge and the race seemed wide-open into November, Young closed strong to become the favorite.

The sophomore led a 97-yard, game-tying touchdown drive against rival Auburn two weeks ago, helping the Crimson Tide rally to win the Iron Bowl in overtime.

Then Young broke the Southeastern Conference championship game record with 421 yards passing in a victory against Georgia's vaunted defense on Saturday. For the season, Young has thrown for 4,322 yards, 43 touchdowns and just four interceptions while guiding the top-ranked Crimson Tide to the College Football Playoff.

As good has Young has been in his first season as Alabama's starting quarterback, following Heisman finalists Mac Jones and Tua Tagovailoa, an argument could be made he is not even the clear best player on his own team.

Will Anderson Jr. appeared to be the Tide’s top Heisman contender until Young went off against Georgia. The sophomore outside linebacker leads the nation in tackles for loss with 31.5 and sacks with 15.5, but he didn't get an invitation to New York.

Nether did Michigan State running back Kenneth Walker III, who is second in the nation in rushing at 136 yards per game with 19 touchdowns. The Wake Forest transfer jumped to the top of the Heisman watch lists after scoring five touchdowns in the 11th-ranked Spartans' victory against Michigan on Oct. 30.

Tide receiver DeVonta Smith won the Heisman last year. Smith broke a streak of four straight quarterbacks to win the Heisman. Since 2000, 17 quarterbacks have won the trophy. Among the non-quarterback winners are Alabama running backs Mark Ingram (2009) and Derrick Henry (2015).

Hutchinson would be the first defensive player to win the Heisman since Michigan's Charles Woodson in 1997. Woodson was also Michigan's last Heisman winner.

The last Michigan player to be a Heisman finalists also played defense, though not exclusively. Defensive back Jabrill Peppers played some offense and returned kicks when he finished fifth in the voting in 2016.

Hutchinson is one of the nation's best pass rushers with 14 sacks. The senior led No. 2 Michigan to its first playoff appearance as Big Ten champions and helped end an eight-game losing streak to rival Ohio State.

Pickett returned to Pitt for a fifth season in 2021, taking advantage of the NCAA's eligibility give-back for playing through the pandemic in 2020, and had a record-breaking year. Pickett passed for 4,319 yards with 42 touchdowns to eclipse school marks and led the 13th-ranked Panthers to their first Atlantic Coast Conference title.

The last Pitt player to be a Heisman finalist was receiver Larry Fitzgerald in 2003.

Stroud completed 71% of his passes for 3,862 yards, 38 touchdowns and five interceptions as the seventh-ranked Buckeyes finished 10-2 in his first season as a starter.

He is the third straight Ohio State starting quarterback to be a Heisman finalist, joining Justin Fields (2019) and Dwayne Haskins (2018).