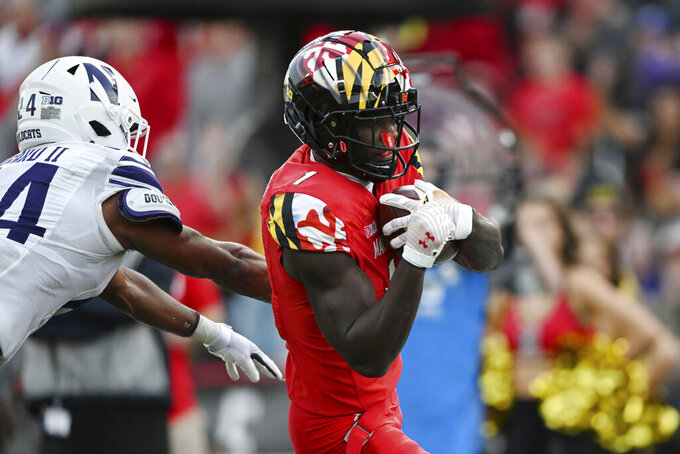 Roman Hemby ran for 179 yards and three touchdowns, including a sensational 75-yard sprint with 3:22 remaining that gave the Terrapins a 31-24 victory over Northwestern on Saturday.

The Terps (6-2, 3-2 Big Ten) overcame the absence of Tagovailoa, the standout quarterback who aggravated a knee sprain last weekend. This is the earliest they've become bowl eligible since 2001, when they did it on Oct. 11.

It wasn't easy. Northwestern tied it at 24 with 3:34 remaining on a 9-yard scoring run by Andrew Clair. On the first play of Maryland's next drive, Hemby slipped through a hole on the left side and outran everyone, eluding three defensive players who dove at his ankles for the touchdown that put the Terps back in front.

“We saw the front that we wanted, and I just came through the mesh, and the linemen got their blocks, the wide receivers worked to the secondary to get their blocks,” Hemby said. “I just had to run and beat two people, and I was able to outrun their angles.”

Brendan Sullivan's deep pass was intercepted by Maryland's Beau Brade with 3:02 to play.

Billy Edwards Jr. — who helped Maryland win at Indiana last weekend after Tagovailoa was carted off — threw for 166 yards and a TD against Northwestern.

The Wildcats (1-6, 1-3) led 17-7 late in the second quarter, but they dropped their sixth straight game since winning the opener against Nebraska in Ireland.

Evan Hull ran for 119 yards and caught a touchdown pass for Northwestern.

Edwards was under constant pressure in the first half and had to scramble out of trouble quite a bit. The Terps were unable to turn first-and-goal from the 2 into a touchdown near the end of the first half. They settled for a field goal and trailed 17-10.

An interception by Dante Trader Jr. early in the third quarter set Maryland up near midfield, and Hemby’s 18-yard scoring run eventually tied the game. The Terps took a 24-17 lead later in the quarter on a 30-yard touchdown strike from Edwards to Rakim Jarrett.

Maryland had a chance to take a two-score lead in the fourth, but a drive that took 6:15 off the clock produced no points when Chad Ryland missed a 46-yard field goal. The Terps had second-and-1 from the 5, but a fumbled snap resulted in an 8-yard loss, and then Edwards took a sack for a loss of 15 that made the field goal much longer.

Northwestern then drove the other way to tie it at 24.

Maryland had scored on its first possession in every game this season — the only FBS team that could still make that claim. That streak ended Saturday, and Northwestern took a 7-0 lead on a 1-yard run by Sullivan.

The Terps tied it on Hemby’s 14-yard touchdown, but the Wildcats scored the next 10 points and went up 17-7 on a 10-yard scoring pass from Sullivan to Hull with 4:50 left in the half.

Northwestern: It was a decent effort by the defense, even accounting for the fact that Maryland's backup quarterback was playing. But the Wildcats eventually gave up the big play on the ground.

“Defensively, I thought we played well except for a handful of plays,” coach Pat Fitzgerald said.

Maryland: Edwards played fine, making plays with his legs and avoiding any turnovers, and Hemby picked up the slack offensively with Tagovailoa out.

“We saw a bunch of young guys step up and play big, and it starts with our quarterback,” coach Michael Locksley said. “Billy came in and really did a tremendous job of leading us and doing the things he's been coached to do.”

It was the first start for both Edwards and Sullivan. Both were threats to run the ball when they weren't able to find open receivers.

“Just being comfortable in the pocket was huge today. Using my legs when I needed to instead of just relying on them and scrambling around when I didn’t have to,” he said. “That was the biggest thing I improved upon. It was fun being out there. We obviously didn’t get the result we wanted to but it was fun playing football and getting my first start.”

Northwestern: The Wildcats play at Iowa next Saturday.

Maryland: The Terps are off next weekend before playing at Wisconsin on Nov. 5.

This version has been corrected to show Maryland’s next game is against Wisconsin, not Penn State.