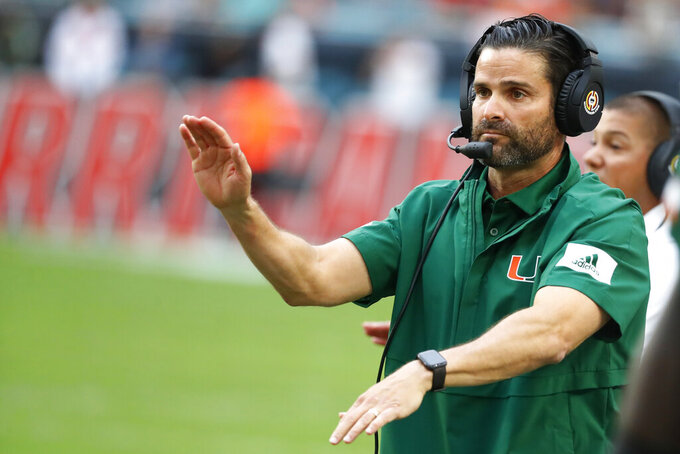 FILE - In this Saturday, Nov. 9, 2019, file photo, Miami head coach Manny Diaz calls out a play during the first half of an NCAA college football game against Louisville in Miami Gardens, Fla. The Hurricanes’ head coach — and former defensive coordinator — will call the plays on that side of the football in 2021, he said Thursday, Jan. 14, 2021 while announcing a slew of other changes including the return of Jess Simpson to coach defensive line(AP Photo/Wilfredo Lee, File)

Manny Diaz decided someone else needed to call Miami’s defensive plays. He chose himself.

The Hurricanes’ head coach — and former defensive coordinator — will call the plays on that side of the football in 2021, he said Thursday, while announcing a slew of other changes including the return of Jess Simpson to coach defensive line. Simpson had that role at Miami in 2018 before leaving for the Atlanta Falcons; after two NFL seasons, he returns to Coral Gables.

Blake Baker will remain as defensive coordinator, though Diaz will assume the bigger role for games.

“Blake will continue to run our defense and I will call the defensive plays on game days, which we feel is our best path to maximizing our strengths on that side of the ball,” Diaz said.

Diaz also has promoted former Miami standout and NFL veteran DeMarcus Van Dyke to cornerbacks coach. He was on Diaz’s staff the last two years as the Hurricanes’ assistant director of recruiting.

Diaz started the defensive-staff shakeup over the weekend with the hiring of Miami native Travaris Robinson as the Hurricanes’ defensive backs coach. The Hurricanes were 67th in total defense and 51st in scoring defense out of 127 teams at the FBS level nationally this past season.

“We are excited to announce these staff hires as we work to improve all facets of our program on and off the field,” Diaz said. “Jess is a proven defensive line coach at all levels who had great success with our defensive line in 2018 and we are thrilled to have him back at UM. DeMarcus is eager to take the next step in his coaching career and work in tandem with Travaris with our defensive backs.”

The Hurricanes (8-3) finished this season ranked No. 22 and are scheduled to open next season against reigning national champion Alabama.

“We can’t wait to hit the ground running with our offseason program,” Diaz said.