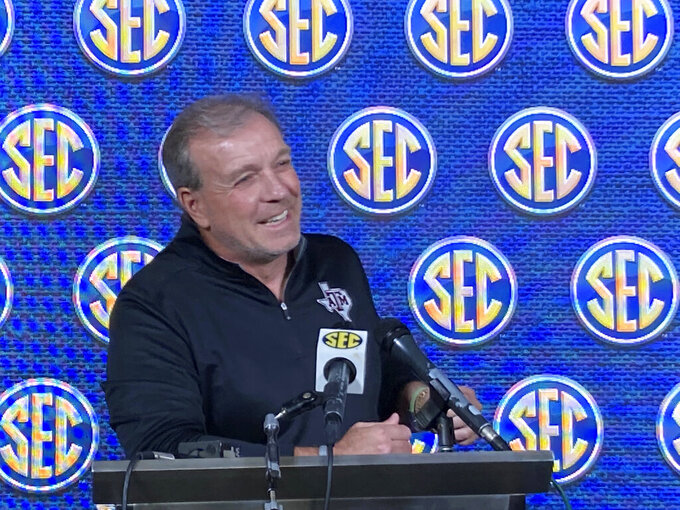 Texas A&M coach Jimbo Fisher addresses a new conference in Destin, Fla., Wednesday, June, 01, 2022. A jovial Fisher said repeatedly on Wednesday he was “moving on” from the war of words between he and his former boss that sprinkled soap-opera drama on the Southeastern Conference's spring meetings this week. (AP Photo/Ralph Russo)

DESTIN, Fla. (AP) — The Southeastern Conference's slogan, “It just means more,” could soon refer to the number of football games the league schedules.

SEC coaches and athletic directors have been meeting this week at a resort on the Gulf Coast of Florida. Atop the agenda is whether the conference schedule should expand from eight to nine games when the league itself grows from 14 to 16 teams with the additions of Texas and Oklahoma.

Whether a decision comes by the time the spring meetings wrap up Friday is still to be determined — and seeming more unlikely at the end of Wednesday's sessions.

"We've got some questions still to answer," Commissioner Greg Sankey said. “We’ve got more work to do.”

The SEC presidents, who have final say on schedule change, meet Thursday with the ADs. Sankey said the executive committee would be updated on the discussions and the conference was in no rush to make a decision, but would not commit to whether the group would vote.

“Wait till Friday,” he said.

Even those in the conference who have generally been supportive of playing more league games acknowledge it's a move that comes with potential complications.

“Eight has worked very well for our conference,” Alabama athletic director Greg Byrne said Wednesday. “You’ve seen how we’ve scheduled (for future seasons) and we’ve added Power Five, Autonomy Five, games to our schedule. Now we did that based off of thinking we were going to continue to play eight games.”

The scheduling model choices have been whittled down to two: Nine games with three permanent rivals for each team and six opponents that would rotate over a four-year cycle or a model more similar to what the SEC uses now — eight games with one annual rivalry and the other seven opponents rotating.

Regardless of the number of games the SEC plays among itself, Sankey said this week the league is heading toward scrapping its divisional format when Oklahoma and Texas jump on board.

The Big 12 schools are currently scheduled to join the SEC in 2025. The Longhorns and Sooners are contractually bound to the Big 12 until then and it could cost tens of millions of dollars to break the deal even a year early.

Oklahoma athletic director Joe Castiglione said at the Big 12 meetings in Dallas the SEC has gotten feedback from the newcomers on scheduling discussions.

“The SEC has been very thoughtful about engaging both Oklahoma and Texas in conversations about scheduling models for all sports,” Castiglione said.

Even though the SEC might not implement a new format until 2025, a decision needs to come fairly soon so its schools can adjust or get out of game contracts for nonconference games that have been signed years in advance.

Long before the SEC decided to expand there were complaints in the conference about how infrequently some teams from across its East and West divisions play each other.

The most glaring example: Texas A&M joined the SEC in 2012 and still has not hosted Georgia.

Dumping divisions would help fix that — and it seems to be a trend throughout major college football.

The Pac-12 already tossed out its divisional format for the coming season and the Atlantic Coast Conference appears headed to do the same by 2023. The Big 12 and Big Ten are also considering how best to structure their conferences and determine a champion in future seasons.

The Big 12 is adding four new members as soon as 2023 and could be a 14-team league until Texas and Oklahoma depart. The current 10-team Big 12 has been playing without divisions and matching the top two teams in its final standings in its football championship game for several years.

“You go back now and look at the results and the history and that kind of proved to be the right call,” West Virginia athletic director Shane Lyons said. “So we don’t want to screw that up as we move forward.”

Adding another conference game in the SEC would also help increase the frequency with which teams play, but it come with downside.

With a nine-game schedule, every other year teams would play more road conference games (five) than home games (four). Plus, an extra conference game is a guaranteed additional loss for half the teams each season.

For some schools, adding an extra degree of difficulty to competing in what has been the toughest conference in the country is not ideal. While Alabama and Georgia aspire to play for national championships every year, consistently stringing together winning seasons is the goal for other programs.

“You have each team, each program sees itself differently based on where it’s at what it does and where it can be,” Texas A&M coach Jimbo Fisher said.

Byrne said it would make sense for the SEC to drop its requirement that each school schedules at least one Power Five nonconference opponent per season if the league does go to a nine-game schedule.

Another issues is the uncertainty of the future of the College Football Playoff. CFP expansion talks fell apart last year, leaving the four-team format in place through the 2025 season.

There is no playoff format for beyond 2025.

“I think a lot of what we have to do right now is not only look at what’s right for our institution, which we’re all going to do, but also what’s right for the game of football," Byrne said. “What’s right for college athletics as a whole as this is evolving very dramatically right now.”