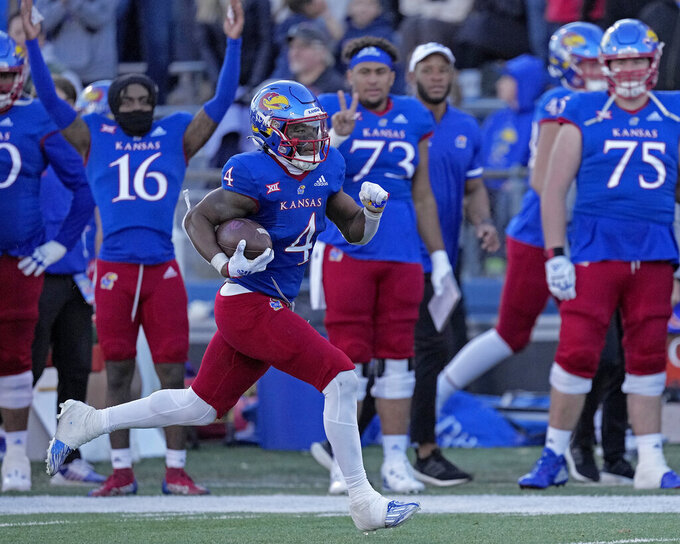 Kansas running back Devin Neal (4) runs for a first down during the second half of an NCAA college football game against Oklahoma State Saturday, Nov. 5, 2022, in Lawrence, Kan. Kansas won 37-16. (AP Photo/Charlie Riedel) 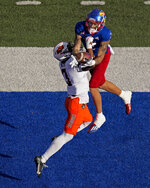 Kansas is bowl eligible for the first time since 2008, and now tries to clinch its first winning record since that same season. The Jayhawks had a season-high 554 total yards against Oklahoma State last week while breaking a three-game losing streak. The Red Raiders need to win two of their final three games to get to consecutive bowls for the first time in a decade. Tech is 4-1 at home.

Kansas defense against Texas Tech passing game. The Jayhawks have multiple interceptions in consecutive games in the same season for the first time since 2018, with three last week. The Red Raiders, who have used three different starting quarterbacks, are the league leader with 318.6 yards passing per game. They also have thrown 16 interceptions, six more than any other Big 12 team.

Kansas: RB Devin Neal has 761 yards rushing and is second in the Big 12 at 6.4 yards per carry. He rushed 32 times for 224 yards and had six catches for 110 yards against Oklahoma State last week.

Texas Tech: Sixth-year LB Krishon Merriweather is the team's leading tackler with 78, which is 19 more than any other Red Raiders player. He is second in the Big 12 with 8.7 tackles per game. His 11 tackles last week against TCU was his third game with at least 10 tackles.

Kansas is coming off a 37-16 win at Oklahoma State, and earlier this season beat Iowa State. Both of those opponents beat the Jayhawks by more than 50 points last season. According to STATS, Kansas is the first team since at least 1980 to twice in the same season avenge such lopsided losses from the previous year. ... Texas Tech hasn't won five home games in the same season since 2009. ... Kansas' Jason Bean has thrown for 986 yards with 11 touchdowns and three interceptions in 3 1/2 games since taking over for injured starter Jalon Daniels.