Leipold says Jayhawks' goal is to become 'next Iowa State' 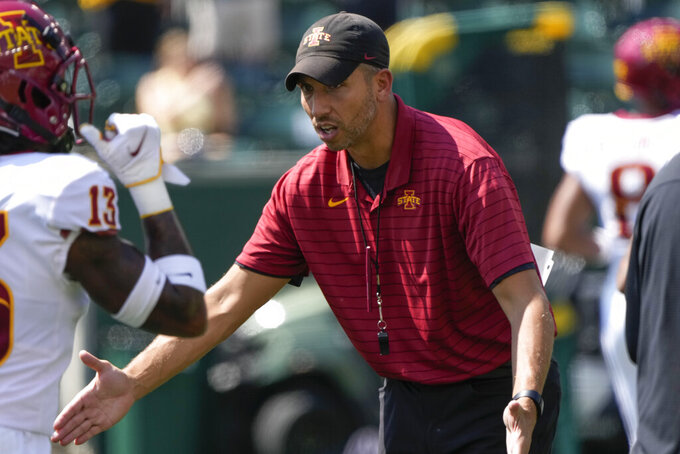 Lance Leipold looks at Iowa State and sees what he hopes will be the future of his Kansas football program.

Before Matt Campbell took over the Cyclones in 2016, only once since 1989 did they have an above-.500 record in conference play. They came into this season off the best four-year stretch in school history and an appearance in the Big 12 championship game.

The Kansas team Leipold took over this year is in worse shape than Iowa State ever was. The Jayhawks haven’t won more than one Big 12 game in a season since 2008, which also is the same year they recorded their most recent conference road victory.

Both are coaching at schools that historically have not invested in football like schools traditionally at or near the top of the Big 12. Both played and coached at two of the most successful Division III programs, and both landed their first FBS head coaching jobs in the Mid-American Conference.

“I really admire him, I really do, and what he's done at Iowa State," Leipold said. “That's a huge measuring stick for us. There's going to be a lot of notetaking as well because that's a program our goal is to be like in time and do some things they've been able to do there.”

Campbell, 41, played at Mount Union and was an assistant on the 2005-06 national championship teams and was head coach at Toledo from 2011-15.

Leipold, 57, played at Wisconsin-Whitewater and returned to coach the Warhawks to 109 wins and six national titles from 2007-14 before building Buffalo into a MAC power over six years.

“It just takes takes the right person and culture to come in there and change things,” Allen said. “I think we were kind of the butt of a lot of jokes in 2016 and years prior to that, so we were right there with them. Now things have changed for us, and over the same period time, things could change for them.”

The Cyclones have won six straight against Kansas, their longest streak in the series. Iowa State also is on a school-record and Big 12-best seven-game home win streak against conference opponents. ISU is 12-1 in its last 13 Big 12 games in Ames.

Kansas' Jason Bean is one of two FBS quarterbacks to post a 100-yard rushing game and a 300-yard passing game through the first month of the season.

Bean rushed for 102 yards against Coastal Carolina and threw for 323 yards against Duke last week. The other 100/300 quarterback is North Carolina's Sam Howell, who has done both twice.

“One of the best athletes that we’ll play against in the Big 12,” Campbell said of Bean.

Kansas has 16 plays of 20 yards or longer through four games compared with 22 such plays in nine games last season, according to cfbstats. Ten of the long plays have gone for at least 30 yards, the third-best mark in the Big 12 and one more than in 2020.

Kansas has gone nine quarters without recording a sack and has a total of two. Only two other FBS schools have fewer. Iowa State has allowed just five sacks.

“Normally we respond well to a loss, like we didn’t play very well against Iowa and then we played pretty well against UNLV,” Allen said. “What we have to do is just be better at holding that new standard and not letting the standard dip.”