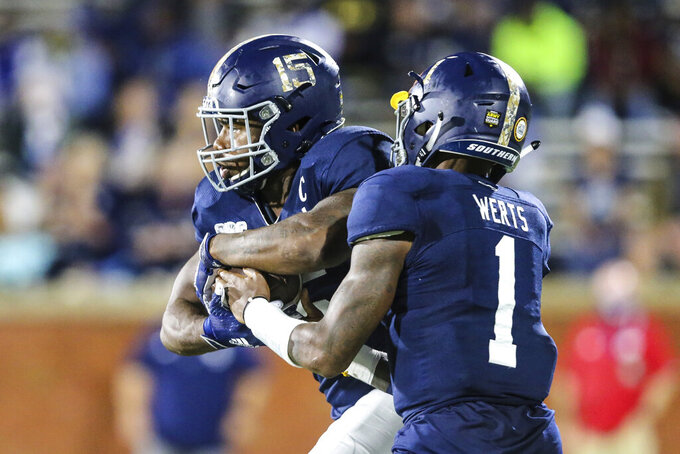 Georgia Southern quarterback Shai Werts (1) hands off the ball to running back J.D. King (15) during the first half of the team's NCAA college football game against South Alabama on Thursday, Oct. 29, 2020, in Statesboro, Ga. (AP Photo/Gary McCullough) 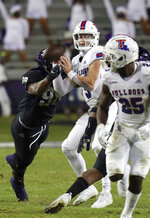 Georgia Southern: CB Derrick Canteen is tied for second in the country with five interceptions as a redshirt freshman.

Louisiana Tech: LB Tyler Grubbs leads the team with 87 tackles to go with 8.5 tackles for loss while starting all nine games. His 9.7 tackles per game ranks in the top 30 of the Bowl Subdivision ranks.

Georgia Southern: The Eagles can surpass last year’s win total with a win under coach Chad Lunsford. Four of Georgia Southern's five losses came by eight or fewer points, the last being a 34-26 loss to Appalachian State on Dec. 12.

Louisiana Tech: Louisiana Tech is going for a seventh straight bowl victory under coach Skip Holtz, who is also pursuing his 150th career victory. The Bulldogs didn't play during the month of November after having four games either postponed or canceled due to coronavirus issues before returning with a win at North Texas on Dec. 3 followed by a loss at TCU on Dec. 12.

Georgia Southern: This marks the Eagles' fourth bowl game and third in a row, winning the GoDaddy Bowl for the 2015 season and the Camellia Bowl for 2018.

Louisiana Tech: The Bulldogs' six straight bowl wins mark the longest active streak in the country, with five of those wins by 14 or more points. This marks the program’s 13th bowl appearance overall.