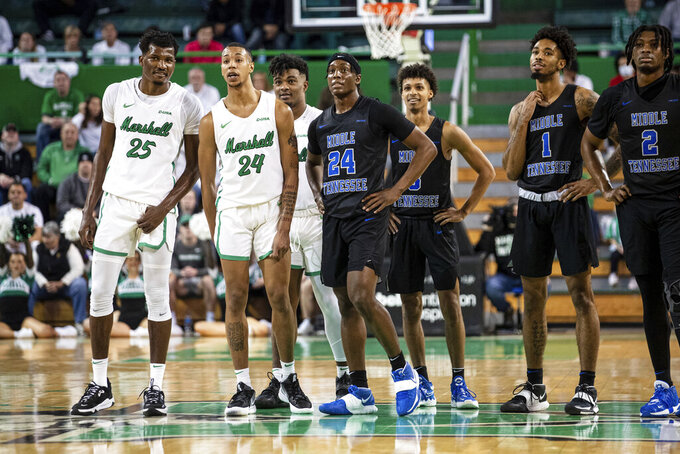 Marshall takes on Middle Tennessee during an NCAA men's basketball game on Thursday, Jan. 27, 2022, at the Cam Henderson Center in Huntington. (Sholten Singer/The Herald-Dispatch via AP)

HUNTINGTON, W.Va. (AP) — Marshall, Old Dominion and Southern Mississippi announced Friday that they plan to end their affiliations with Conference USA a year early in order to join the Sun Belt.

The three schools issued separate but similar statements, saying they'll stop participating in Conference USA effective June 30, 2022, after considering “the best interests” of their respective schools, fans and athletes. In the fall, they had announced they'd be joining the Sun Belt by July 2023, along with FCS powerhouse James Madison.

Marshall, Old Dominion and Southern Miss first told the C-USA in December of their intentions not to participate after the current school year. They wanted to ensure an amicable separation and that the remaining C-USA members had complete and competitive schedules for the sports in which the departing schools competed.

However, the schools said the league refused to discuss a resolution with them.

“Our student-athletes, coaches, staff, fan base and the remaining members of Conference USA are deserving of clarity in this matter, thus the need for today’s message,” Marshall said.

Conference USA said in a statement Friday night that all college leagues and their members have agreed-upon bylaws and contractual obligations during times of realignment.

"We have chosen not to engage publicly, but have communicated with our member institutions and expect them to meet those obligations,” C-USA said.

While the Sun Belt is gaining four schools, UT-Arlington is leaving this summer to return to the Western Athletic Conference.

Six other C-USA schools announced last year that they would be leaving for the American Athletic Conference at a date to be determined. After C-USA announced the addition of four new members starting in 2023, Middle Tennessee State and Western Kentucky decided they would remain in the conference.