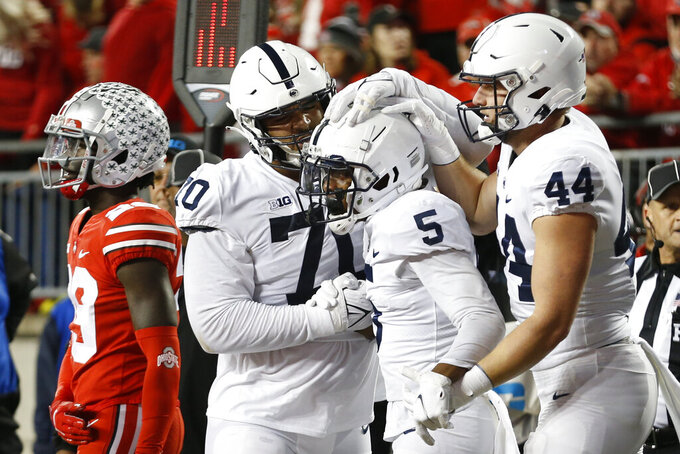 Line: Penn State by 9 1/2, according to FanDuel Sportsbook.

Maryland hasn't played in the postseason since 2016, but the Terrapins have a chance to become bowl eligible with a victory. Penn State is trying to avoid back-to-back losses in a series the Nittany Lions have dominated. Maryland won last year's meeting 35-19.

Penn State: WR Parker Washington. Jahan Dotson often steals the show with his highlight-reel catches, but Washington has been pretty sure handed lately, too. He had a career-best nine grabs for 108 yards in a loss to Ohio State last weekend and could enjoy an uptick in targets, especially on short routes and screens, if Penn State struggles again to run the ball.

Maryland: WR Rakim Jarrett. He had five catches for 144 yards and two touchdowns at Penn State a season ago, and he's a leader of a Maryland receiving corps that has been hurt by injuries this year.

Before last year's loss, Penn State was having little trouble with Maryland, winning the previous three meetings 66-3, 38-3 and 59-0. ... Nittany Lions coach James Franklin was an offensive coordinator at Maryland from 2008-10 and a receivers coach there from 2000-04. During the earlier stint, he overlapped with current Maryland coach Michael Locksley, who was a running backs coach. ... Tagovailoa has four 300-yard passing games this season, one shy of Scott Milanovich's school record set in 1993.