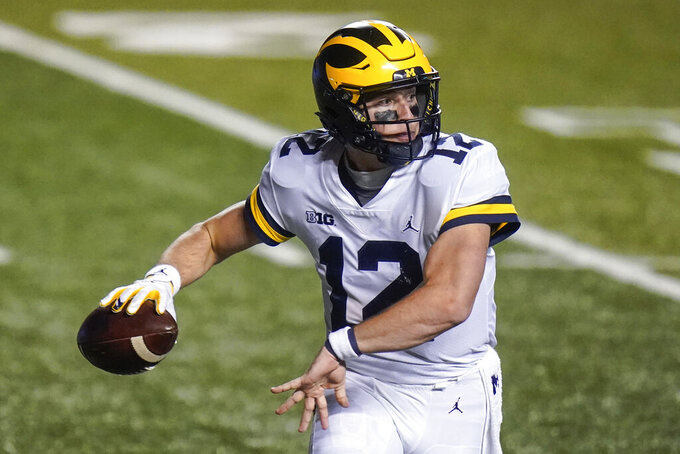 Michigan's Cade McNamara throws a pass during the second half of an NCAA college football game against Rutgers on Saturday, Nov. 21, 2020, in Piscataway, N.J. Michigan won 48-42. (AP Photo/Frank Franklin II)

Wolverines coach Jim Harbaugh seemed to say McNamara did enough to win the job shortly after that game. Two days later, he pumped the breaks to perhaps give Penn State some doubt about who will take the first snap on Saturday at the Big House.

“I'm not going to make any dramatic announcement," Harbaugh said.

Michigan defensive back Vincent Gray, though, shared what didn't seem to be much of a secret: “From the looks of it, I think Cade’s gonna be starting."

McNamara began 2020 third on the depth chart behind Milton and Dylan McCaffrey. The brother of Carolina Panthers running back Christian McCaffrey chose not to come back to the program this fall for a fourth season and Milton simply did not produce enough to keep his job.

McNamara replaced Milton against the Scarlet Knights and threw four touchdown passes and ran for another score. After the game, Harbaugh was asked if McNamara would be his quarterback going forward.

“The way he played tonight, he’s going to be in there," he said.

McNamara believes he is ready to lead Michigan (2-3) against the Nittany Lions (0-5) in his first college start.

“I feel like I’ve done enough for me to be in that position," he said. “That’s coach Harbaugh’s decision, whatever is best for the team. I’m confident enough in myself that if my number’s called again, I can perform the same way.”

The Nittany Lions have opened a season with five losses for the first time in school history. Penn State's turnover-prone offense has led to the defense giving up 30-plus points in six straight games, dating to last season, in what has easily been the worst stretch in program history.

“It doesn’t matter what our record is, it’s not pressure," Shelton said. “It’s an expectation to win because none of us are losers.”

Michigan defensive tackle Donovan Jeter has moved into the startling lineup for the first time. It has been a reward for offseason training that started on campus last winter and continued back home in Beaver Falls, Pennsylvania.

“There will never be a time when you work hard and it doesn't pay off," Jeter said.

The senior played sparingly in the past and allowed a poor performance against Wisconsin last year to affect him after the final whistle.

“I got mentally tougher," Jeter said. “I played horribly against Wisconsin and that affected my mindset the rest of the year. I told myself, `I'm never going to have that feeling again.' So, I invested everything I had in working harder."

Penn State tight end Pat Freiermuth will miss the rest of the season after suffering an unspecified injury against Ohio State. Freiermuth caught a combined 13 passes for 204 yards over the next two games, but sat out last week and now joins a list of big names that won’t finish the season.

Running back Journey Brown, the team’s leading rushing a year ago, had to retire from football due to a heart condition and his understudy, Noah Cain, was injured on the opening drive of the season.

Combined, the trio totaled nearly 40% of Penn State’s offensive touches and yards last season and scored 28 of the offense’s 59 touchdowns.

“We have to act like winners,” Penn State receiver Jahan Dotson said.

By Ralph D. Russo 6 hrs ago
By Mark Long 7 hrs ago
8 hrs ago
By The Associated Press 9 hrs ago
By Travis Johnson 10 hrs ago