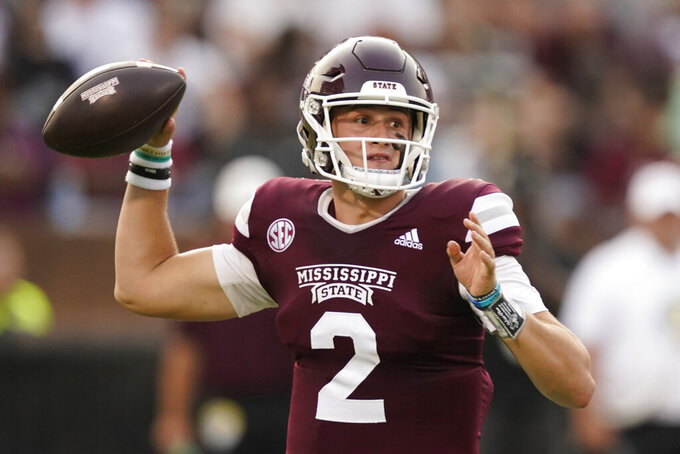 MEMPHIS, Tenn. (AP) — The Mississippi State Bulldogs are the only Power Five team on Memphis’ schedule this season, and Tigers coach Ryan Silverfield refuses to shy away from the importance of this game.

“I can’t sit here and say: ‘It’s just like every other game.’ There’s a heightened sense of it,” Silverfield said. “Let’s be real about it.”

Memphis has had mixed success in recent years against major conference teams with wins over Kansas, UCLA and Ole Miss. Beating a team from the Southeastern Conference, well, just means more. Silverfield said it’s definitely “a different perception from those on the outside looking in” than a win over Nicholls State.

That also means the stress level goes up too for Saturday’s game.

“I get stressed out over Spring Practice No. 2,” Silverfield said.

These teams are renewing a series dormant since 2011 and that the Bulldogs have dominated since 1993. Memphis has improved over the past decade alone with a string of bowl games, winning seasons and NFL-bound offensive threats.

Mississippi State is looking for its best start since 2018 — two years before coach Mike Leach arrived on campus. His Bulldogs face a defense that gave up a whopping 680 yards of offense last week — 582 through the air. Will Rogers leads the nation completing 36 passes a game.

“The biggest thing that jumps off is experience,” Leach said of Memphis’ defense. “They’ve all been there. They’re all seniors. Some of those guys have started more games in college than our kids in high school. We’ll go out there and see how it goes.”

A pair of freshmen in quarterback Seth Henigan and running back Brandon Thomas have set the tone for the Tigers’ big-play offense. Henigan has completed 41 of 65 passes and is averaging 341 yards passing. Meanwhile, Thomas is averaging 169 yards a game and right at 10 yards per carry.

“We’re both young players, and we both have a lot to learn,” Henigan said. “As we continue to get these experiences on the field and in game situations, it’s really good for us in the long run. But we’ve got to focus on right now. We can’t wait on the long run.”

BULLDOGS THROUGH THE AIR

Silverfield acknowledged that the Bulldogs are “going to try and throw the ball all over the yard.”

Rogers is the key to Mississippi State’s offense. The 6-foot-2 sophomore has completed 72 of 96 passes for an average of 332 yards a game. He has five touchdown passes and only one interception.

One strong point for the Bulldogs’ special teams is kickoff returner Lideatrick Griffin, who has returned five kicks for an average of almost 50 yards a return, including a 100-yard touchdown to open the win over North Carolina State and a 70-yarder against Louisiana Tech.

I WAS HERE ONCE

Leach has had several stops in his coaching career from assistant jobs at Cal Poly, College of the Desert and Iowa Wesleyan to head coaching jobs at Texas Tech, Washington State and now Starkville. But he couldn’t recall ever coaching in Memphis.

“I broadcast a game one time at the Liberty Bowl, and that’s as close as I got,” said Leach who spent a short time as a broadcast analyst between head coaching jobs.