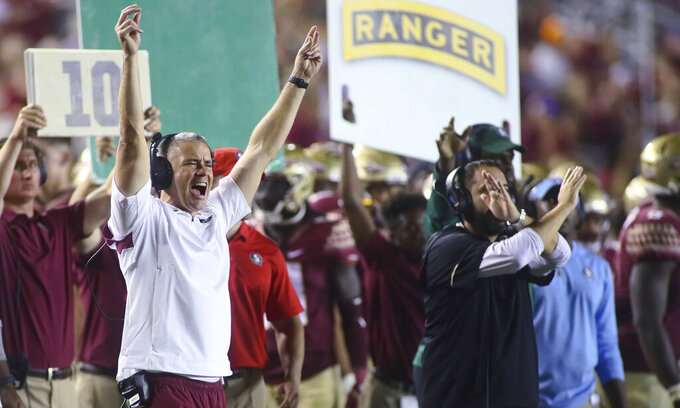 Florida State coach Mike Norvell gestures to the team as a play is called during the fourth quarter of an NCAA college football game against Jacksonville State on Saturday, Sept. 11, 2021, in Tallahassee, Fla. Jacksonville State won 20-17. (AP Photo/Phil Sears)

TALLAHASSEE, Fla. (AP) — Mike Norvell said he believes in his players and that Florida State has lost two games to start the season they should have won. But they haven’t.

Any ascent from a 3-6 season in 2020 has instead been halted by a demoralizing loss where the Seminoles took two steps back. Florida State has struggled to get started in September, dropping five straight season openers.

This September has been a wild ride — an overtime loss to No. 9 Notre Dame that seemed to indicate signs of improvement but then a stunning 20-17 loss to FCS Jacksonville State on Saturday.

“I believe in who these kids are and what they’re about,” Norvell said. “But obviously that’s not occurring and we’re not doing that for 60 minutes to the level. So, yes, the first week, we lost a game I believe we should’ve won. Same thing happened Saturday night. First week, people are happy we played hard. Well, that’s going to be the standard. We’re going to play hard.”

The Seminoles are 0-2 for the third time in five seasons and now open Atlantic Coast Conference play Saturday against Wake Forest with perhaps more questions than they had in the preseason. Florida State suffered from 11 penalties, inconsistency in the pass game and a defense that gave up touchdowns on the final two drives — including a final-play 59-yard pass in Jacksonville State’s 20-17 win.

One of the biggest concerns coming into the season was the offensive line, specifically pass protection. Florida State had injuries on Saturday to center Maurice Smith and left tackle Robert Scott, which had a domino affect on the line.

But Lucas is no longer part of the team, school spokesman Derek Satterfield confirmed on Monday, though he did not give a reason. Lucas had started 14 games for Florida State the last two years and the move further thins an offensive line group that is sorely lacking depth.

Florida State coaches have consistently said they are looking for eight dependable offensive linemen and Lucas was viewed as a backup that could fill in at one of the guard spots. Depth will remain a factor, especially if Smith and Scott are unable to play against the Demon Deacons.

What began with cautious optimism, albeit one that began with a defeat, is now a season in which the Seminoles have stumbled and are trying to find their footing. Florida State has found success establishing the ground game in rushing for 235 yards per game (25th in the FBS), but the passing attack has been plagued by interceptions and drops.

The Seminoles' defense, which had been effective in forcing Jacksonville State to punt eight times, buckled late in the game by allowing a 97-yard drive and then the 83-yard game-winning drive on Saturday. The decisive drive included the last-play 59-yard catch and run from Zerrick Cooper to Damond Philyaw-Johnson.

“I know how much it hurts whenever you come up short,” Norvell said. “I see it. I live it. That’s a part of these kids. They work extremely hard in this program and it’s also so disappointing and so heartbreaking when you see things that show up that are uncharacteristic in how we train or what we do. We have to learn to overcome that. I don’t care who you play. It does not matter.”

The self-inflicted wounds have been especially painful. Florida State ranks 121st among the 130 FBS teams in penalties after committing nine for 54 yards against Notre Dame and 11 for 114 yards against Jacksonville State.

In too many critical moments, plays that are the difference between should have won and winning, the Seminoles have made mistakes or fallen short.