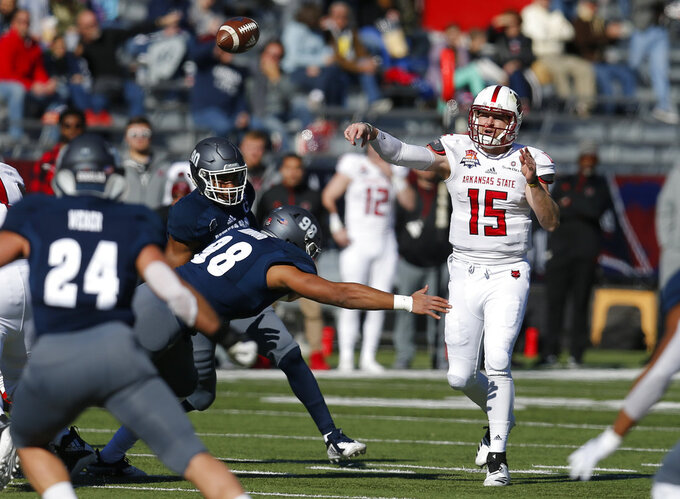 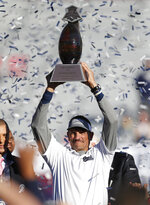 Gangi flipped the ball out to his tight end and Arkansas State's defense quickly converged. Roberson shed the first would-be tackler like he was brushing off a bug, made a beeline for the corner of the end zone, diving across the line just before two more defenders could stop him.

"They took some things away and we had to go to the tight end more," said Gangi, who threw for 200 yards and a touchdown on 18-of-34 passing with two interceptions. "I gave him a chance and he made a great play for me, broke a tackle and dove into the end zone for the winner."

Nevada (8-5) looked as if it would never get the chance. The Wolf Pack struggled against Arkansas State's stout defensive front, barely eking out 100 yards of total offense for three quarters.

Nevada stayed in it with a bend-don't-break defense and found a rhythm with a couple of big plays in the fourth quarter. Devonte Lee put the Wolf Pack up 10-7 on a 1-yard run with 1:06 left and, after the Red Wolves tied it with Blake Grupe's last-play field goal, Roberson sent them racing onto the field with his bulldozing touchdown.

"This is right up there at the top as far as guys fighting and believing in each other," Nevada second-year coach Jay Norvell said.

Arkansas State (8-5) needed a little more belief — at least in the red zone.

The Red Wolves made five trips inside Nevada's 20 and came away with seven points. Arkansas State had two turnovers in the end zone and twice failed to convert on fourth down, including once on a trick play.

Throw in a blocked field goal and another short one badly missed by Grupe, the Red Wolves head into the offseason wondering what if after racking up 499 total yards and coming away with 13 points.

"We've had a struggle with that for a long time," Arkansas State coach Blake Anderson said. "You can blame on whatever you want to, at the end of the day we just didn't get it done."

Arkansas State's Warren Wand ran for 140 yards and Justice Hansen threw for 275 yards, but also had three interceptions — two in the end zone — after throwing six during the regular season.

The Red Wolvers' miscues in the red zone allowed Nevada to still be within 7-3 at halftime despite managing 72 total yards.

"We believed in the plan and if you continue to work, good things will happen," Novell said. "Just amazing."

Nevada's offense came to life at just the right time to avoid ending the season with a loss to rival UNLV and a disappointing bowl performance.

Arkansas State will lament its lost offensive opportunities all offseason.

Arkansas State lost two of its best players by early in the third quarter.

Defensive end Ronheen Bingham, who led the Red Wolves with nine regular-season sacks, had to be helped from the field with a serious left leg injury in the first quarter. On the first play of the third quarter, defensive back Justin Clifton went down with an injury.

"It was tough seeing two of our best defensive players go down," Red Wolves safety B.J. Edmonds said. "We still played well after that, but who knows what could have happened."

Nevada receiver Ben Putman had two of the game's biggest plays, catching a pair of 44-yard passes from Gangi — one on a flea flicker, the other to set up Lee's 1-yard score late in regulation.

A walk-on, Putman finished with four catches and a game-high 144 yards. After the game, Norvell rewarded the junior with a scholarship.

"I didn't know who he was three months ago," Norvell said. "All he does is compete.."

Arkansas State: Hansen is a senior, so the Red Wolves will need a new QB next season. They also have 14 players on their two-deep roster who are seniors.

Nevada: The Wolf Pack also will be searching for a new QB with Gangi in his final year of eligibility. They also have 14 seniors on the two-deep roster, most of their skill players on offense should be back.