NIL was factor on signing day; how big of one up for debate 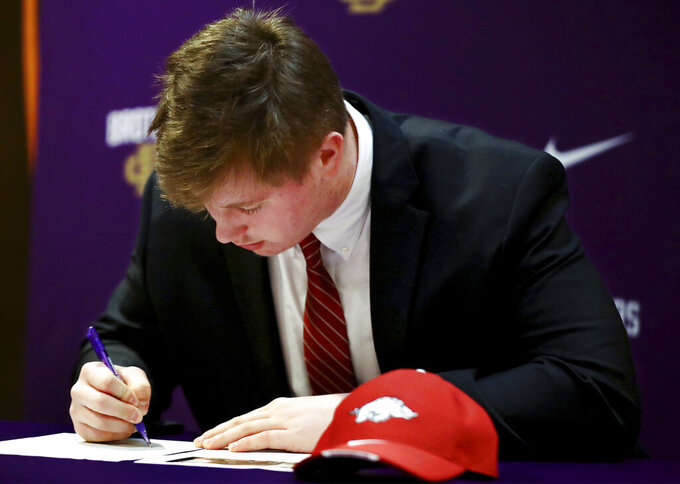 Neither Hunter nor other top recruits said whether NIL compensation had anything to do with their school choices. But coaches say NIL came up in the recruiting cycle, the first since the NCAA cleared the way July 1 for college athletes to cash in on their celebrity.

“It’s very much discussed and talked about, not necessarily in inducements or anything like that or quid pro quo,” Missouri coach Eli Drinkwitz said. “You’ve got to educate (recruits) on what the opportunities could potentially be or what you’re going to do to help somebody increase their personal brands and how are you going to educate them on what their opportunities of NIL could be and would be, should they choose the University of Missouri.”

The options to be paid for endorsements and personal branding probably was a major factor in the decisions of some recruits who signed letters of intent last week. Athliance CEO Peter Schoenthal, whose company works with schools and athletes on NIL details, said he doubts it was an overriding one for most.

Schoenthal predicted the breadth of a school's NIL programming — ranging from educating athletes on NIL to boosters and businesses offering opportunities — eventually will become just another thing recruits consider.

“NIL is going to become like facilities. At some point everybody is going to have great facilities,” Schoenthal said. “I’d like to think once we get a little more regulation and data points to show the kids, it doesn’t matter where you go. It's about how much effort you put in, how marketable you are and how good you are at getting boosters involved.”

Schoenthal said he’s wary of the latest trend in NIL: booster collectives pushing the envelope of NCAA pay-for-play rules by pooling money that’s directed to athletes in the name of NIL.

A nonprofit called Horns With A Heart announced it would make $50,000 annual payments to University of Texas offensive linemen starting in August 2022. In return, the linemen must do work on behalf of charities, such as making personal appearances.

After Horns With A Heart was announced Dec. 6, four highly touted linemen pledged to Texas. Two of them, Kelvin Banks and Cameron Williams, de-committed from Oregon after coach Mario Cristobal left the Ducks to take the Miami job.

Banks, Williams and Malik Agbo, who announced on signing day he would go with the Longhorns, did not return Associated Press messages seeking comment on what role, if any, NIL played in their school choice.

Booster collectives have formed around at least two dozen Power Five schools, and more are on the horizon. Schoenthal said it’s crucial for the rules surrounding NIL to be more clearly defined so there’s a clear line between earning money for services rendered and pay for play.

According to Opendorse, one of the platforms used by athletes to connect with third parties for money-making ventures, seven male athletes who used Opendorse technology earned $100,000 or more from NIL from July 1 through Nov. 30. A total of 110 earned more than $10,000.

Opendorse — which works with 570 NCAA schools, most of them Division I — did not break down earnings by sport.

“It’s like going down Highway 51 if there was nobody ever there that checked your speed,” he said. “Nobody’s driving 45. Everybody’s gonna be driving 70. I don’t drive much past 52 because somebody might give me a ticket. I don’t think there’s any tickets being handed out right now for this. I think it’s out of control.”

Schoenthal, who puts together educational programs for the athletes at the 35 schools Athliance works with, said his concern is that recruiters in the first few months of the NIL era have oversold the amount of money that could be made.

“Promises are being made without the ability to back up those promises and if you don’t fulfill on those promises, there’s no accountability for not meeting the expectation you set as a coach on the recruiting trail,” he said.