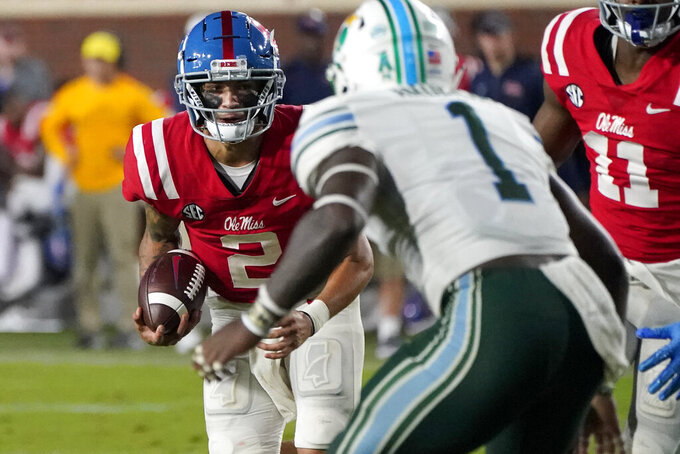 Some things to watch in Week 5 of the Southeastern Conference:

No. 2 Georgia (4-0, 2-0) hosts No. 8 Arkansas (4-0, 1-0) in one of two marquee games matching four of the SEC’s seven ranked schools. The Bulldogs waxed Vanderbilt 62-0 last week and look to stay atop the East Division. Off to their first 4-0 start since 2003 and holding their highest ranking in nine years, the resurgent Razorbacks seek their second consecutive upset of a top-10 team after beating then-No. 7 Texas A&M 20-10 last week. Points won’t come easy between these schools: Georgia tops FBS in scoring defense (5.8 points per game), 10 spots above the Hogs (14.5). No. 1 Alabama (4-0, 1-0) hosts No. 12 Mississippi (3-0, 0-0) in a matchup of West border rivals. While the Crimson Tide own this series 55-10-2, including last year’s 63-48 victory, the Rebels come to Tuscaloosa with their highest ranking since Week 7 of the 2016 season. Ole Miss opens league play leading the FBS in several offensive categories, including yardage (635.3 per game) and scoring (52.7 points). The Crimson Tide rank fourth at 46.5 points per outing and have intercepted six passes, standing 10th defensively.

No. 10 Florida (3-1, 1-1) visits unbeaten Kentucky (4-0, 2-0) in an East showdown. Florida averages nearly 541 yards per game to rank ninth nationally and boasts the league’s best ground attack at 322.5 yards per game, a notable departure from last season’s pass-heavy philosophy. Kentucky ranks fifth in rushing at 204.5 per outing and is led by the SEC’s top back in junior Chris Rodriguez Jr. (522 yards). The Wildcats have the SEC’s No. 2 defense (260 yards allowed per game) and yields just 87.2 on the ground. They allowed South Carolina just 58 yards rushing in last week’s 16-10 victory.

Arkansas is much improved, but still faces a huge test as an 18-point underdog, according to FanDuel Sportsbook, at Georgia, which has won its first two SEC games by a 102-13 margin. The Bulldogs have allowed just one touchdown this season and haven’t lost at home since Oct. 12, 2019, against South Carolina (20-17 in two overtimes). Georgia leads the series 11-4 after last year’s 37-10 victory in Fayetteville, but the Hogs won their last visit to Athens, Georgia, 31-24 in 2010.

Ole Miss quarterback and SEC passing leader Matt Corral has thrown a touchdown pass in 15 consecutive games and can match Eli Manning for the program’s second-longest streak on Saturday. Chad Kelly (22 games) holds the record. ... Arkansas has outscored opponents 34-0 in the first quarter this season. ... Kentucky is 4-0 for the second time in four seasons, impressive considering it ranks next to last in FBS turnover margin at minus-9. ... Vanderbilt’s game against UConn doesn’t promise an offensive explosion with the schools ranked 123rd (284.5 yards) and 129th (219.6) respectively of 130 FBS programs.

LSU sophomore wide receiver Kayshon Boutte extended his streak of touchdown receptions to six games with two last week at Mississippi State to share the FBS lead with eight. He also ranks 39th with 309 yards receiving. More importantly, Boutte has helped the Tigers (3-1, 1-0) rebound from a season-opening loss to UCLA with three consecutive victories entering Saturday’s game at No. 22 Auburn.