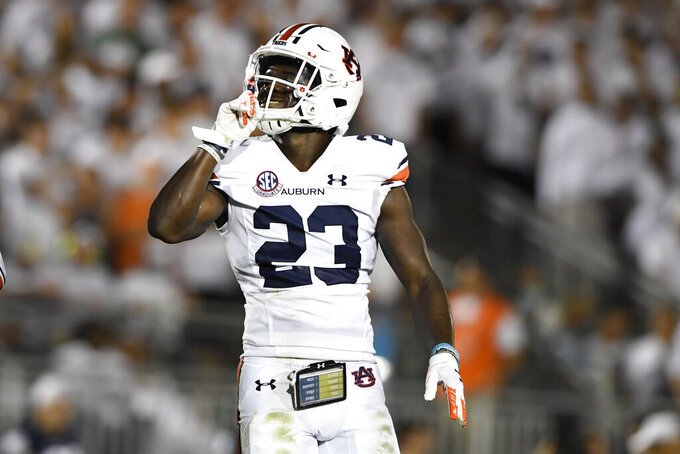 STATE COLLEGE, Pa. (AP) — Jaquan Brisker skipped across a field littered with white pom poms and toward a row of Penn State students painted white from head to toe.

The Nittany Lions' star safety had a big smile on his face, and it didn’t fade one bit even as he tripped over a photographer while celebrating a dramatic win on a raucous night in Happy Valley.

Brisker broke up a desperation pass toward the end zone by Auburn's Bo Nix as time expired and No. 10 Penn State held on to beat No. 22 Auburn 28-20 on Saturday night.

Sean Clifford completed 28 of 32 passes for 280 yards and two touchdowns as Penn State (3-0) welcomed back its white out crowd to Beaver Stadium for a rare visit from a Southeastern Conference teams.

“I was ready,” Brisker said. “When you come to Penn State, you expect to play in front of big crowds like this. You’ve got to take it in for 10 seconds, then it’s back to reality.”

Jahan Dotson made 10 catches for 78 yards and a touchdown, tight end Brenton Strange caught a touchdown and tight end Tyler Warren and Noah Cain ran for scores to help the Nittany Lions beat an SEC opponent at home for the first time since 1985 against Alabama.

Penn State had to make two late defensive stands to hold the lead.

First, the Nittany Lions kept Auburn (2-1) out of the end zone after a first-and-goal at the 10. An incomplete fade from the 2 on fourth down with 3:08 left gave Penn State the ball back.

Auburn coach Bryan Harsin said he and offensive coordinator Mike Bobo script plays for those situations and that was the call they liked best. He said Nix had multiple options —- not just the fade that really wasn't close — but said he'd have to watch the film before knowing if it was the best decision.

"I trust what he saw out there — we’ll look at it, we’ll learn from it and we’ll go from there,” Harsin said.

The Nittany Lions could not run out the clock and punted back to Auburn with 45 seconds left.

Auburn managed to get to the Penn State 23 with 3 seconds left. Nix fired deep down the middle but Brisker cut in front of Demetris Robertson a few steps in front of the goal line and knocked it down.

Brisker also had a key late interception near the goal line in the opening win against Wisconsin.

Tank Bigsby scored a pair of rushing touchdowns and Anders Carlson added two field goals for the Tigers, who lost their 10th straight road game to a top-10 team since 2014.

Penn State had no white out last year because the pandemic meant no fans. The Nittany Lions broke it out early this season for Auburn’s first trip to a Big Ten stadium since 1931 against Wisconsin.

A sea of white with specks of Auburn orange was hyped throughout, pom poms waving and singing along to “Sweet Caroline” to start the fourth quarter.

Despite the electric atmosphere with more than 109,000 fans, the Tigers never looked rattled.

The first game regular-season game on campus between Big Ten and SEC teams since 2011 must have had a lot of fans asking for more just like it.

Bisgby ran for 102 hard yards and Nix was 21 for 37 for 185 yards and no turnovers in the first real test under Harsin, who was hired away from Boise State in the offseason.

“This loss, it should burn," Harsin said. "There a lot of guys in that locker room that are disappointed, and they should be.”

Maybe one time, Auburn looked out of whack.

The Tigers opted for a wideout option pass to open the third quarter.

The Tigers mounted their longest drive of the night after that, a 15-play, 75-yard trek that ended when Bigsby beat the defense around the right edge for a 6-yard score.

After the Auburn defense made a fourth-down stop at midfield, Carlson cut Penn State’s lead to 21-20 with a 43-yard field goal with 14:55 left when Harsin passed on going on fourth-and-1.

Penn State took over from there.

Cain made it 28-20 when he took a delayed handoff up the middle for 3 yards midway through the fourth.

Auburn: The Tigers fell to 1-5 against Top 25 teams since last year because they lacked some plays in the passing game when they most needed them.

Penn State: The Nittany Lions showed some creativity on offense with wnd-arounds to Dotson, an option pass that worked and direct snaps to a hulking tight end.