No. 12 Oregon on 4-game win streak, travels to face Arizona 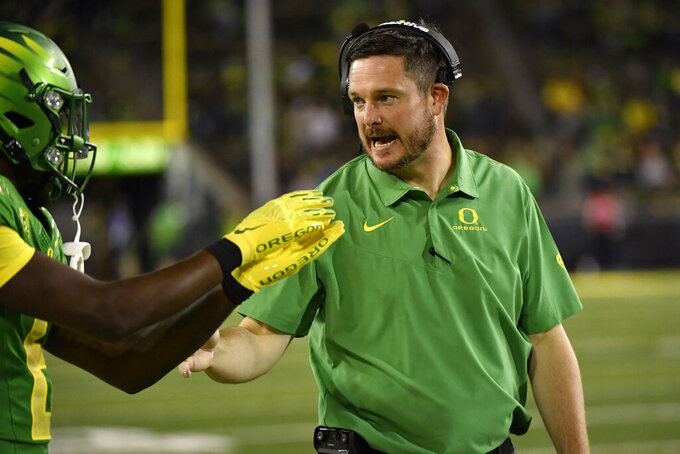 Arizona's Jayden de Laura had one of the best passing games in school history against one of the Pac-12's worst teams last week.

Now he'll try to duplicate the feat against a team that's among the league's best.

Arizona hosts No. 12 Oregon in Tucson on Saturday night in arguably the biggest game of second-year coach Jedd Fisch's tenure. The Wildcats (3-2, 1-1 Pac-12) are already halfway to bowl eligibility one season after finishing with a 1-11 record.

Oregon (4-1, 2-0) has won four straight games since opening the season with a loss to Georgia.

“We’re expecting Arizona’s absolute best, but just like we’ve said every week, we’re not playing Arizona, we’re playing Oregon,” Ducks first-year coach Dan Lanning said. “That’s our focus right now. We got to be the best version of us.”

Arizona has languished at or near the bottom of the Pac-12 the past few years but has been much more competitive in Fisch's second season. The Wildcats thumped Colorado 43-20 last weekend, a blowout that ultimately cost Buffs coach Karl Dorrell his job.

De Laura had a monster game against Colorado's porous defense, throwing for 484 yards and tying a school record with six passing touchdowns. The sophomore — who is a transfer from Washington State — has adapted quickly to his new program.

“I think that he’s somebody who will continue to improve each week,” Fisch said. “It was neat to see how he played and that fact that we’ve only had him for five games.”

Oregon has been on a roll since losing to Georgia on Sept. 3. The Ducks have scored at least 41 points in each of their four victories during their winning streak. Quarterback Bo Nix has thrown for 1,261 yards and 12 touchdowns this season.

“These away games are tough. It’s a good opponent,” Nix said. “It’s going to be good competition, good atmosphere. We’ve got to go in there really sharp and not do anything that will hurt yourself.”

His biggest play was an 80-yard touchdown run in the third quarter.

“That run was fun,” Lanning said. “When he got over there after, he was sucking wind on the sideline.”

Arizona's offensive improvement can be traced back to de Laura's arrival, but he's also got a pretty good pair of pass catchers.

Singer had a couple of particularly impressive catches. One was a one-handed grab down the sideline for a big gain. The other was a difficult 5-yard touchdown catch in traffic in the back of the end zone.

Oregon's pass defense hasn't been great this season, giving up 282.2 yards per game, which ranks last in the Pac-12.

That number is inflated by a rough game against Georgia in the opener, but they also gave up 375 yards passing against Washington State two weeks ago.

Now it's time to try to slow down de Laura, Cowing and Singer.

“There haven't been a lot of teams that have really slowed them down offensively,” Lanning said. “They only maybe hurt themselves a couple of times, to be honest. They’ve done a really good job. They get the ball downfield, they take long shots, so this will be a really good challenge.”

But the Ducks haven't been good when they've ventured into Tucson, losing the past two games by a lopsided margin. The last time Oregon beat Arizona in Tucson was 2011.