No. 14 Stanford looks to bounce back against Utah 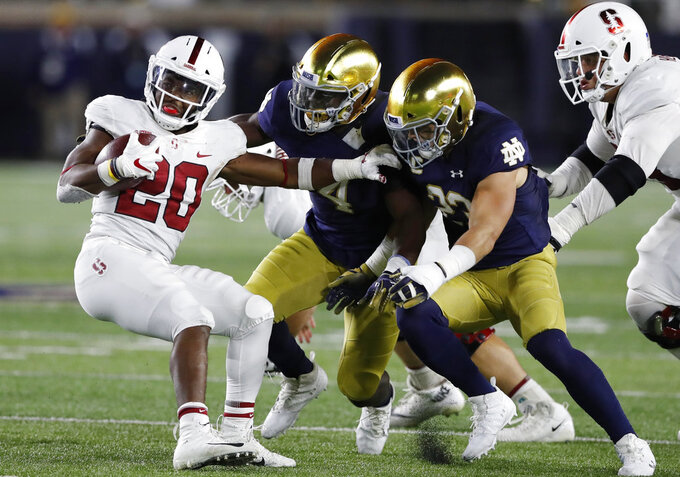 FILE - In this Sept. 29, 2018, file photo, Stanford running back Bryce Love (20) is stopped by Notre Dame linebackers Te'von Coney (4) and Drue Tranquill (23) during the second half of an NCAA college football game in South Bend, Ind. Love has struggled to get going this year for Stanford. He is averaging 4.3 yards per carry, down from a mark 8.1 a year ago, and already missed one game against UC Davis to heal up some bumps and bruises. He left last week's game against the Irish with an injured ankle and is questionable for this week's game against Utah. (AP Photo/Carlos Osorio, File)

STANFORD, Calif. (AP) — The offensive inconsistency that has plagued Stanford despite four straight wins to open the season finally caught up to the Cardinal last week.

No. 14 Stanford now looks to bounce back from that loss at Notre Dame and find that offensive groove that has been missing all season when the Cardinal (4-1, 2-0 Pac-12) host Utah (2-2, 0-2) on Saturday night.

"It's about consistency and we're not there as an entire team right now," coach David Shaw said. "We just have to get more consistent. We're getting healthier but we're not where we need to be. It's in progress. We hoped to be farther ahead than we are in terms of execution but we have more games to play. There are a lot of things we need to stabilize."

With an offensive line that has been hampered by injuries and has lacked the dominance Stanford is used to from that unit, the Cardinal have struggled to run the ball with any consistency. K.J Costello made up for it earlier in the season with some big days through the air but even he struggled last week in the 38-17 loss at Notre Dame, throwing for only 174 yards.

The defense also had its own issues against the Irish that need to be worked out quickly if the Cardinal are going to remain in contention in the Pac-12 North.

"You never want a wake-up call with a loss," linebacker Sean Barton said. "It's something that makes you look at yourself and look at what you have to work on."

That's a feeling the Utes know well after losing their first two conference games to Washington and Washington State. Utah is averaging just 16 points per game against FBS competition and quarterback Tyler Huntley hasn't thrown a TD pass since a season-opening win against FCS-level Weber State.

"We probably needed more production out of the throw game," coach Kyle Whittingham said. "That was maybe the thing we were lacking."

LOVE'S HEALTH: Last year's Heisman Trophy runner-up Bryce Love has struggled to get going this year for Stanford. He is averaging 4.3 yards per carry, down from a mark of 8.1 a year ago, and he missed the game against UC Davis to heal up some bumps and bruises. He left last week's game against the Irish with an injured ankle and is questionable against the Utes.

HOME COOKING: The Cardinal have won 11 straight home games, tied with Clemson and Washington for the third-longest active streak in the nation. One team that hasn't had a problem at Stanford Stadium is Utah, which has won all three trips to the Farm in 1989, '96 and 2014. Stanford should get a boost this week with this being the first home game of the season since the start of fall classes, meaning there should be many more students in attendance than at the first three games.

COACHING DEANS: The Pac-12 hired five new coaches this year but Stanford and Utah are islands of stability. Shaw has been head coach for the Cardinal since being promoted from assistant in 2011 to take over for Jim Harbaugh. The only coach in the conference to have been in the job longer is Whittingham, who took over from Urban Meyer in 2005.

"I like talking to Kyle," Shaw said. "We're both sons of football coaches. We've both been around this thing all our lives. Philosophy-wise we're pretty much lock in step."

FAMILY TIES: Stanford guard Brandon Fanaika and Barton both grew up in Utah. Fanaika's older brother, Jason, played for the Utes, and Barton grew up attending Utah games and his parents and grandparents attended the university. Barton missed last year's game with an injury and is excited for the chance to play this year.

"It's a family affair for me with Utah," he said. "It was very disappointing for me to miss out last year. I grew up a huge Utah fan, all my friends, all my family, cousins, everybody went to Utah."