No. 15 Cincinnati tries to maintain momentum against USF 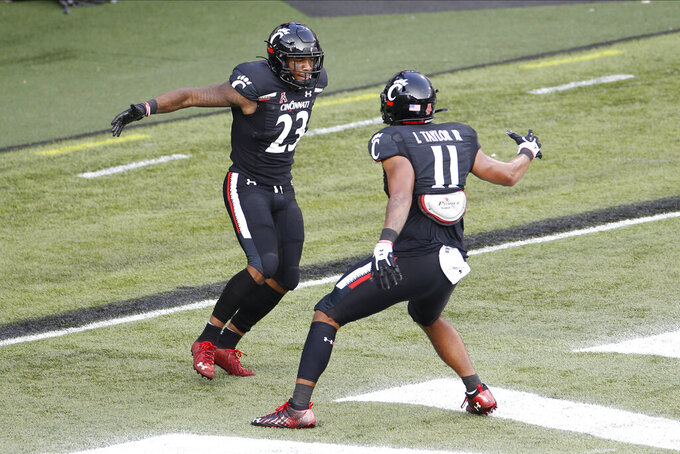 Cincinnati got its first real test against Army's prolific triple-option attack last week and prevailed 24-10 to stay unbeaten and ranked. South Florida, which lost to then-No. 7 Notre Dame 52-0 on Sept. 19, likely will be less of a challenge. USF's game against Florida Atlantic last week was postponed because of COVID-19 issues. The Bearcats under Luke Fickell have won the past two meetings over USF, whose loss to Notre Dame was the worst in program history. New coach Jeff Scott, the longtime Clemson assistant, will try to get his team to rebound in the American Athletic Conference opener.

Cincinnati QB Desmond Ridder vs. USF's defense. The third-year starter is completing nearly 60% of his passes and has amassed 454 yards and four touchdowns through the first two games. New USF defensive coordinator Glenn Spencer arrives after transforming the defense at FAU last season. The Bulls gave up 429 total yards against Notre Dame after surrendering 284 in the opening 27-6 win over The Citadel.

USF: RB Johnny Ford has posted 40-yard runs in each of the first two games, boosting his yards-per-carry average to 9.4. He rushed for 70 yards on six carries against the Irish.

CINCINNATI: RB Gerrid Doaks. After rushing for three touchdowns and catching a 32-yard pass for another score against Austin Peay, Doaks had a career-long 60-yard TD reception against Army last week.

No fans will be allowed in 40,000-capacity Nippert Stadium except family of coaches and players. ... Cincinnati is 24-5 since 2018, ranking among the top 10 teams in college football in winning percentage during that span. ... Ridder became the eighth quarterback in program history to throw for 5,000 yards. ... UC LB Jarell White had a career-high 15 tackles against Army and was named AAC defensive player of the week. ... Michael Young Jr., a grad transfer from Notre Dame, is UC’s leading receiver with seven receptions for 70 yards and a TD. ... USF is 2-6 in trips to Nippert Stadium, the fifth-oldest stadium in the nation. ... Cincinnati was one of only seven teams in the FBS to go undefeated at home the last two seasons, and won its first two home games this season.

By Jim Vertuno And Pat Eaton-Robb 18 minutes ago
By John Coon 11 hrs ago
By Pete Iacobelli 13 hrs ago
By Dave Campbell 17 hrs ago
By Anne M. Peterson 19 hrs ago