No. 16 Kentucky hosts LSU looking to remain unbeaten in SEC 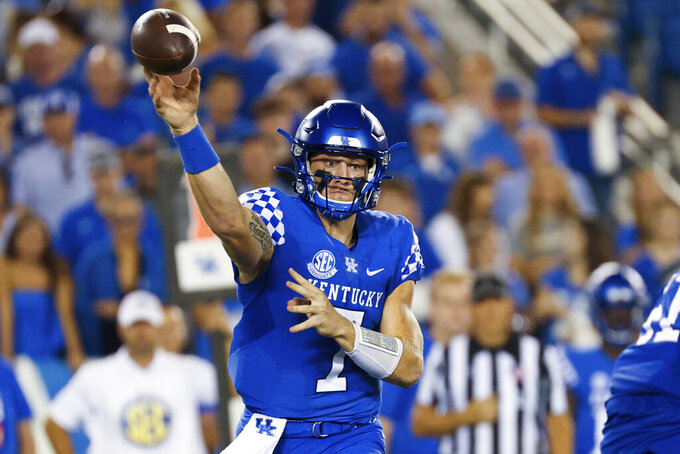 Kentucky quarterback Will Levis (7) throws a pass during the second half of an NCAA college football game against Florida in Lexington, Ky., Saturday, Oct. 2, 2021. (AP Photo/Michael Clubb)

LEXINGTON, Ky. (AP) — Kentucky’s euphoria after its big win over Florida that earned the Wildcats a No. 16 ranking has given way to maintaining that momentum.

LSU wants to ruin the Wildcats’ encore hopes as the Tigers try to regroup from a close loss.

“It was a lot to build on, but a lot to improve on,” coach Mark Stoops said. “Another big-time challenge, and we’re looking forward to it.”

For all the celebrations sparked by that emotional win over the Gators, Kentucky has plenty of room for improvement. The Wildcats managed just 224 yards offensively and mounted just one sustained drive over 50 yards, though it resulted in a game-tying touchdown.

On the other hand, they took advantage of game-changing opportunities created by Josh Paschal’s blocked field goal and J.J. Weaver’s interception, converting them into TDs. Kentucky believes its best effort is close, and players are encouraged to be unbeaten despite the growing pains.

“That says we’ve got a lot more coming,” running back Kavosiey Smoke said.

While and Kentucky and Stoops are thriving, LSU's Cajun coach, Ed Orgeron, is under increasing scrutiny. The Tigers have gone 8-7 since winning a national title in the 2019 season.

The Tigers haven’t been ranked this season since losing their opener at UCLA and missed a chance to climb back into the AP Top 25 Poll when they lost a fourth-quarter lead in last week’s 24-19 home loss to No. 22 Auburn that snapped a three-game winning streak.

Orgeron has made a point this week of repeatedly presenting himself as accountable for the Tigers’ recent failings.

“Ultimately, I’m responsible for the performance of this team,” he said, noting that he doesn’t want to give the impression he’s pointing fingers at staff or players when he tries to explain various problems with LSU’s play.

“I’m going to take full responsibility for everything that happens in this program, and that’s just the way it’s going to be.”

Some other things to watch as LSU visits Kentucky:

LSU wide receiver Kayshon Boutte enters the game leading the nation with nine touchdown receptions and a seven-game streak of TDs dating back to last season. The sophomore has caught 30 passes for 436 yards and has the attention of a Kentucky secondary that aims to limit his impact.

“One of the best we'll defend all year," Stoops said. “He makes 10-yard throws into 50-yard gains. You’ve got to be alert for him, but they have other guys that’ll hurt you as well.”

Both teams enter the game minus key defensive players. LSU is without top cornerback Derek Stingley Jr. indefinitely after having a procedure this week on his injured left foot. He had missed the previous two games.

Kentucky lost nose guard Marquan McCall against Florida with what Stoops said was a lower extremity injury that will keep him out “for a little bit.” Sophomores Josaih Hayes and Justin Hayes will share duties at the position.

“We need to make a couple adjustments on the things that we’re doing,” he said, “maybe some different sets, some different formations to help us be more aggressive and attack the line of scrimmage. We’re not doing that well. Hopefully we can get that done this week.”

Not previously known as a pass defender, Kentucky linebacker Jacquez Jones has quickly become one. His goal-line deflection sealed the victory against Florida and came three games after his acrobatic interception set up a TD against Missouri. The Ole Miss transfer earned SEC defensive player of the week honors on Monday for his nine-tackle performance.

Orgeron fielded numerous questions this week about apparent communication problems between first-year offensive coordinator Jake Peetz in the coaches’ booth to the sideline and quarterback Max Johnson. LSU has periodically had to call timeouts to avoid delay-of-game penalties – including on the opening play of a fourth-quarter drive last weekend.

Orgeron said the problems at times have stemmed from trying to change play calls at the line of scrimmage in response to formations that defenses are showing. “We just need to settle down mostly just call the play and let it go and not try to change the play,” he said.