No. 16 Mississippi aims to slow down Brin, Tulsa offense 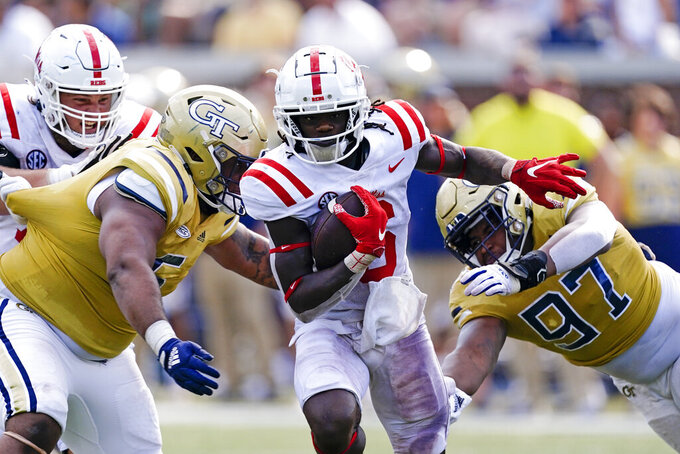 Mississippi running back Zach Evans (6) runs through Georgia Tech defensive linemen T.K. Chimedza (5) and Akelo Stone (97) on his way to a touchdown in the first half of an NCAA college football game, Saturday, Sept. 17, 2022, in Atlanta. (AP Photo/John Bazemore)

Line: Ole Miss by 21 1/2, according to FanDuel Sportsbook.

Ole Miss is trying to keep its considerable momentum before heading into the Southeastern Conference opener with No. 8 Kentucky next week. The Rebels' 42-0 win over Georgia Tech was their largest margin over a nonconference Power Five opponent since beating Boston College 54-0 on Oct. 7, 1950. Tulsa has beaten five current SEC members over the years. The Hurricanes are seeking a third straight win since opening with a 40-37, double-overtime loss at Wyoming.

Davis Brin and the nation's top passing game against an Ole Miss defense which has allowed just 13 points through three games. Brin has two of the nation's top 10 receivers in Keylon Stokes, who has 3,007 career yards, and JuanCarlos Santana. The Ole Miss defense ranks fifth in FBS averaging 4.33 sacks per game, led by linebacker Khari Coleman and defensive backs Tysheem Johnson and A.J. Finley.

Tulsa: Brin is leading the nation with 1,206 passing yards, 11 touchdown passes and an average of 397 yards per game in total offense. He has already topped 420 yards twice in three games.

Ole Miss: RBs Zach Evans and freshman Quinshon Judkins are the only pair of teammates in the country averaging 95-plus rushing yards per game. They're also second and third in the SEC in rushing. Evans is averaging 105.7 yards a game and Judkins 96.3.

This is the teams' first meeting since the 1964 Bluebonnet Bowl, a 14-7 Tulsa win, and their first in Oxford. ... The Rebels have won 11 straight home games, the longest streak since winning 12 in a row from 1960-64. ... Ole Miss has held eight straight opponents to 21 points or less, the longest active streak among Power Five teams. ... Tulsa has scored 35 or more points in its first three games for the first time since 2015, coach Philip Montgomery's debut season. ... Tulsa's Stokes ranks third nationally with 457 receiving yards. The Rebels' Jonathan Mingo leads the SEC and ranks 10th in FBS with an average of 22.6 yards per catch.