No. 17 Iowa State's tight ends living up to preseason hype 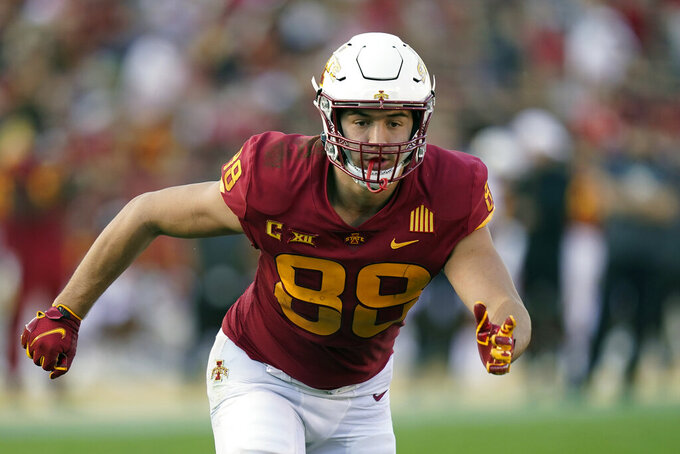 Iowa State tight end Charlie Kolar runs on the field during the second half of an NCAA college football game against Texas Tech, Saturday, Oct. 10, 2020, in Ames, Iowa. Kolar, Chase Allen and Dylan Soehner came into the season as perhaps the most celebrated group of tight ends in the country, and they still are. (AP Photo/Charlie Neibergall)

Charlie Kolar is a witty guy who in an eight-minute interview Tuesday dropped in mentions of his golf game, his fire safety class and the importance of a player's cleats when the weather turns bad.

His most mundane response came when he was asked how he thinks he and his fellow Iowa State tight ends are performing through seven games.

Kolar, Chase Allen and Dylan Soehner came into the season as one of the most celebrated groups of tight ends in the country, and they still are.

Those three, along with reserve Easton Dean, have combined for 45 catches. Only Boston College's tight ends, with 52, have more.

Kolar is the 17th-ranked Cyclones' second-leading receiver with 23 receptions for 264 yards and three touchdowns. Allen has 13 catches for 173 yards and two scores.

Soehner has eight catches but mostly plays the role of the heavy. The 6-foot-7, 272-pounder has been a run blocker for 187 snaps and is the highest-rated tight end in that role in the country, according to Pro Football Focus.

“Each one is playing some of the best football of their career,” Campbell said. “Them playing at such a high level has been big for this football team.”

Kolar and Allen played important roles in Iowa State's comeback win against Baylor two weeks ago. Kolar outran the safety covering him to catch a 22-yard pass from Brock Purdy in the back of the end zone to pull the Cyclones within a touchdown in the third quarter. Allen later beat the same safety for the go-ahead touchdown on a 10-yard pass.

“That mismatch we have throughout the game is pretty sweet," Purdy said. “It’s nice as a quarterback. They're really an option every single play as far as passing the ball. I’m really blessed to have them on my side and excited to see what they do down the stretch.”

Campbell said all three are capable of executing everything that's required of a modern tight end.

Each can play the traditional tight end spot next to a tackle, flex out as a wide receiver to create mismatches with smaller defensive backs or play F-back, a hybrid position that incorporates fullback, receiver and tight end.

“You look at the National Football League, it's those guys who can do all three things really well,” Campbell said. “We're fortunate this group has really grown and developed.”

Kolar said he and his tight end mates have areas where they can get better, whether it's running crisper routes, getting separation from defenders or creating holes and setting edges for Breece Hall and other runners.

“We're 5-2. That's the most important stat,” Kolar said. “We don't try and focus so much on our room. It doesn't matter how many touchdowns you score if you lose the game. I think we've helped the team out, but we can continue to improve, especially this week.”