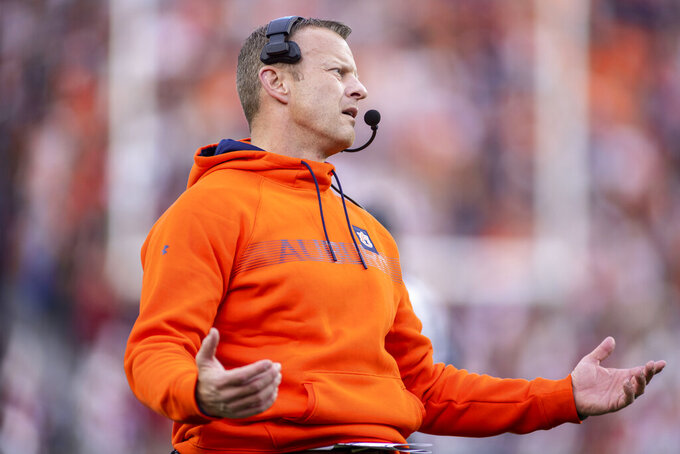 Auburn head coach Bryan Harsin reacts to a call during the first half of an NCAA college football game against Alabama, Saturday, Nov. 27, 2021, in Auburn, Ala. (AP Photo/Vasha Hunt)

Line: Auburn by 2 1/2, according to FanDuel Sportsbook

Houston is seeking its third 12-plus win season after winning 13 in both 2011 and 2015. The Cougars also are trying to snap a four-game losing streak in bowl games. Auburn, meanwhile, is trying to halt a four-game skid before heading into the offseason. The Tigers have lost at least seven players who either opted out of the bowl or are transferring. The Cougars are minus their biggest star, All-America cornerback and dangerous return threat Marcus Jones, who also opted out.

Auburn's offensive line, which is minus three starters, versus a defensive line nicknamed “Sack Ave.” The Cougars rank fifth nationally in sacks per game (3.38) and had seven sacks and 14 tackles for loss in the regular-season finale at UConn. Twelve different defensive linemen have recorded sacks, led by D'Anthony Jones (seven) and Logan Hall (6.5), who is opting out of the game.

Auburn: QB T.J. Finley gets another chance to state his case as the future starter after replacing an injured Bo Nix, who has transferred to Oregon. Finley, an LSU transfer, turned in a gutsy performance despite an ankle injury against No. 1 Alabama and led a comeback win over Georgia State.

Houston: RB Alton McCaskill has run for 883 yards and 16 touchdowns and was named American Athletic Conference rookie of the year. The 16 rushing scores ranks ninth nationally and first among true freshmen. It's also second-most in program history; Greg Ward Jr. had 21 in 2015.

Auburn’s offensive line will be without injured center Nick Brahms, tackle Brodarious Hamm (NFL draft) and Tashawn Manning (transfer to Kentucky). ... Jones’ departure leaves a big void for Houston, along with Hall's. Jones, the Paul Hornung Award winner as college football’s most versatile player, returned two punts and two kickoffs for touchdowns this season and had five interceptions. ... Auburn's star cornerback Roger McCreary and linebacker Zakoby McClain are among those sitting out to prepare for the draft. ... Auburn’s ninth straight bowl appearance ties the school record set from 1982-90. The Tigers are just 11-15-1 against ranked opponents in bowl games. Houston has dropped four straight bowls. ... This will be Houston’s 14th bowl appearance in the last 17 seasons, second only to Texas A&M’s 15 among programs in the Lone Star State.