No. 3 Ohio State hoping for return to field against Spartans 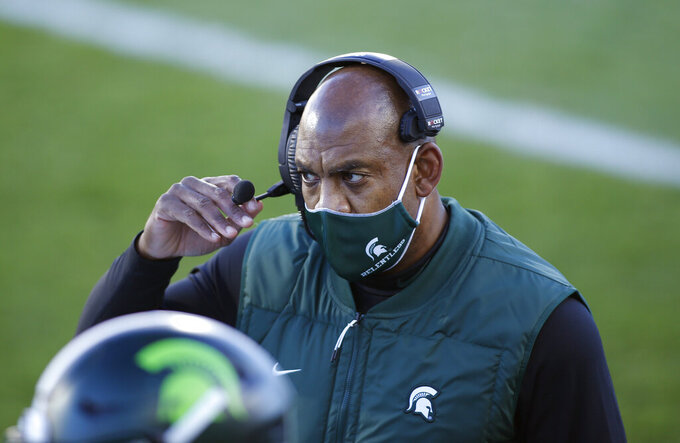 The first step for No. 3 Ohio State is showing up.

If the Buckeyes can do that, they have to like their chances of reaching another Big Ten title game.

Right now the biggest question isn't whether Ohio State can win out — it's whether each of its last two regular-season games will be played. If so, then the Buckeyes will have the six games needed to be eligible for the conference championship game. It's going to be a close call, however, after last weekend's coronavirus-related cancellation against Illinois.

That was the second game Ohio State has missed during this truncated season. The Buckeyes have two left: Saturday at Michigan State and then the following weekend against Michigan.

The Big Ten requires six games for a team to be eligible for the title game, unless the average across the whole league falls below six — a possibility that seems remote at the moment. Ohio State (4-0, all Big Ten) missed a Nov. 14 game because of an outbreak at Maryland. Then the virus hit the Buckeyes.

First Ohio State announced that coach Ryan Day tested positive. Then the school voluntarily canceled the game at Illinois because of positive tests. The team was allowed to resume full practices this Tuesday afternoon — but without Day. Ohio State hasn't done any media availability this week.

If the Buckeyes are able to take the field, they'll face a Michigan State team coming off an upset victory over another previously undefeated team. The Spartans (2-3) beat then-No. 11 Northwestern last weekend.

“It definitely helps coming off a good game last week," Michigan State quarterback Rocky Lombardi said. "We've got a little bit more momentum. The team is feeling better. Any advantage we can have, we'll take it.”

Filling in for Day, defensive line coach Larry Johnson is getting his first chance to be a head coach.

The 68-year-old Johnson has coached the Ohio State defensive front since 2014. He was hired by former coach Urban Meyer. Before that Johnson spent 18 years as defensive line coach at Penn State.

Johnson wanted to be head coach at Penn State after Bill O’Brien left for the NFL’s Houston Texans, but he didn’t get the job and chose to leave. Meyer snapped him up right away.

Johnson, who developed Nick Bosa, Joey Bosa and Chase Young into top-three overall draft picks, is known for his close relationships with players and the fact that he doesn't swear — a rarity among college football coaches.

THE OTHER NEW BOSS

Mel Tucker is in his first season at Michigan State and has already pulled off a win at Michigan and a victory over that ranked Northwestern squad.

Ohio State is No. 4 in the playoff ranking, so it's certainly possible the Buckeyes could qualify for that even if they miss one of these next two games.

“It definitely means something, especially being from right outside Columbus. It's insane how they love their football in Columbus. It's ridiculous," Henderson said. "We're always going to play with a chip on our shoulder, and I think maybe that chip might grow even more this week.”

This is Henderson's third shot at the Buckeyes. Michigan State lost 26-6 and 34-10 the past two years.