No. 5 Notre Dame to face No. 9 Oklahoma State in Fiesta Bowl 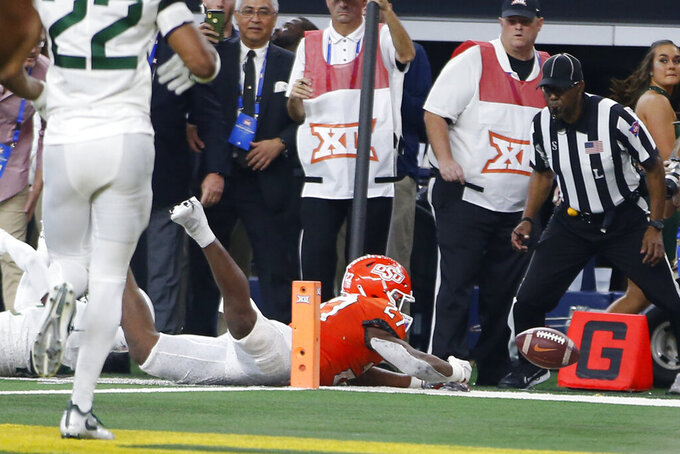 Oklahoma State running back Dezmon Jackson (27) is stopped short of the goal line by Baylor safety Jairon McVea on fourth down in the second half of an NCAA college football game for the Big 12 Conference championship in Arlington, Texas, Saturday, Dec. 4, 2021. (AP Photo/Tim Heitman)

The disappointment sets up a nice consolation: another marquee matchup in the Fiesta Bowl.

Just short of the CFP, the Irish and Cowboys will meet in a New Year's Day bowl that's produced some high-level games through the years.

“It's really cool. It’s going to bring a lot of national recognition,” Oklahoma State coach Mike Gundy said Sunday. “Obviously, the committee feels they're a team that's just right there and it will draw a lot of recognition across the country because of their history. And I'm excited about Oklahoma State, the way people recognize us coast to coast.”

The Irish (11-1) shook off an Oct. 2 loss to Cincinnati to win their final seven games, putting themselves in position to earn a CFP playoff spot despite coach Brian Kelly's decision to leave for LSU.

Notre Dame promoted defensive coordinator Marcus Freeman to head coach Friday and had hoped for a bit of chaos during the conference championship games Saturday.

The Irish didn't get it.

Wins by No. 4 Cincinnati and No. 2 Michigan left them on the outside looking in, fifth in Sunday's final CFP rankings. No CFP, but the Irish have a chance to win their first major bowl game since the 1993 Cotton Bowl under Lou Holtz — under a new coach, no less.

“I know the word rally is used a lot around Notre Dame, but you really see the program rally around one another in the last five days,” said Notre Dame offensive coordinator Tommy Rees. “We haven't felt this in the program before, this excitement and support for one another.”

The Cowboys (11-2) were agonizingly close to reaching the CFP for the first time. They rallied from a 21-3 halftime deficit against No. 6 Baylor in the Big 12 championship game and put together a late drive, reaching the Bears' 2-yard line.

Oklahoma State failed on three tries and, with the clock winding down, Dezmon Jackson ran around the edge toward the end zone. Baylor’s Jairon McVea tracked him down and Jackson's reach to the pylon missed by inches.

The 21-16 loss left the Cowboys short of the Big 12 championship and the playoff. They finished ninth in the final CFP rankings.

“If we got two more inches, Baylor would be in the same situation we are now. Sometimes that happens,” Gundy said. “There's nothing that happened yesterday that can take away from what these guys achieved this year.”

The first meeting between Notre Dame and Oklahoma State sets up what could be another memorable game at the Fiesta Bowl.

The Cowboys have one of the nation's stingiest defenses, finishing first nationally with 55 sacks and 8.5 tackles for loss per game. They're third in total defense, fifth against the run and eighth in scoring defense.

“We've heard about Oklahoma State all year and a lot of the conversation has been about how strong their defense has played,” said Rees, who played quarterback at Notre Dame from 2010-13. “They present a lot of challenges, they do a lot things, they're very multiple with coverages.”

The Irish have a well-balanced offense and won their final six games by an average of 27.3 points per game, capped by a 45-14 victory over Stanford in the finale. Jack Coan has thrown for 2,641 yards and 20 touchdowns, with Kyren Williams adding 1,002 yards and 19 TDs on the ground.

“They’re skilled. They have a lot of good players. Really good players go to Notre Dame,” Gundy said. “I know coach Kelly left and went to LSU and I know coach Freeman is there now, but as we all know, players play in the games. With them hiring within, their system will stay pretty tight, my guess, leading into the bowl game.”

Freeman's elevation to head coach has a similar feel to how Gundy got the job in Stillwater.

Gundy was Oklahoma State's offensive coordinator in 2004 when Les Miles left for LSU. Like the Irish, the Cowboys moved quickly and promoted Gundy to head coach.

Both teams are familiar with playing in the Fiesta Bowl.

This will be Notre Dame's sixth trip to the desert, where the Irish have lost three straight Fiesta Bowls since beating West Virginia in 1989.