No. 5 Notre Dame faces defensive test against No. 2 Buckeyes 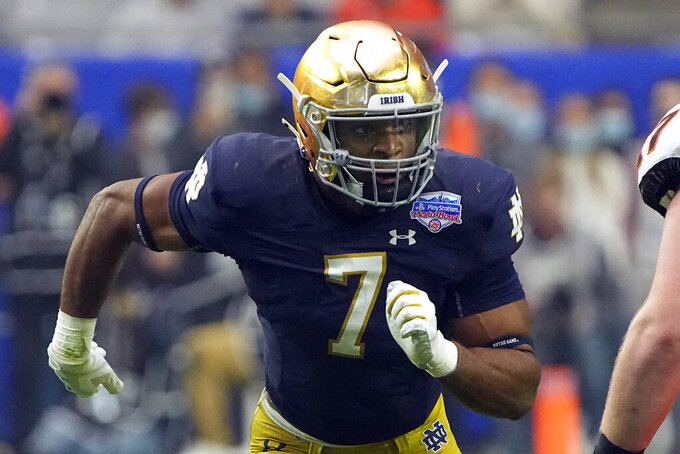 FILE - Notre Dame defensive lineman Isaiah Foskey (7) plays during the second half of the Fiesta Bowl NCAA college football game against Oklahoma State, Saturday, Jan. 1, 2022, in Glendale, Ariz. If Notre Dame is going to beat Ohio State for the first time since 1936, everyone in South Bend knows the defense must ace its test. (AP Photo/Rick Scuteri, File)

The Fighting Irish open the season at No. 2 Ohio State, facing an offense that led the FBS in total yards and scoring last season, and is only expected to improve in C.J. Stroud's second season as the starting quarterback.

And if Notre Dame is going to beat Ohio State for just the first time since 1936, everyone in South Bend knows the defense must ace its test on the road.

“You want an opportunity to go and play against the best,” Notre Dame coach Marcus Freeman said. “There is no better way to see where we are as a football team.”

Freeman understands the intrigue of this matchup better than most.

Not so long ago, he was a Buckeyes linebacker and last season Freeman was Notre Dame's defensive coordinator. But after Brian Kelly's departure for LSU, Freeman took over as head coach and hired Al Golden as his replacement.

Now it's Golden's job to figure out how to keep Stroud corralled. Last year, he completed 71.9% of his passes, threw for 4,435 yards, 44 touchdowns and six interceptions as Ohio State piled up 561.2 yards and 45.7 points per game. Stroud finished fourth in the Heisman Trophy voting.

He enters this season as one of the Heisman frontrunners, seeking to add the other missing line from his resume — Big Ten champion.

Ohio State has won four straight in this series, with Notre Dame's last win coming on Halloween 1936 when it hung on for a 7-2 victory in the driving rain. The Buckeyes only score that day came on a blocked punt that resulted in a safety.

At least the game-planning features Joseph and Isaiah Foskey, who were also preseason All-Americans. Foskey led the Irish with 11 sacks last season.

Notre Dame is expected to rely on a 10-player defensive line rotation with as many as 10 defensive backs and four linebackers also seeing time just to keep players rested against the Buckeyes' fast-paced offense.

“Those guys can rotate in and just take the top off the defense,” Freeman said, referring to the Buckeyes' receiving corps . "If you don’t stop the run, they’ll run it all day long. The ability to stop the run is most important."

And it shows in the results.

Ohio State failed to top the 30-point mark three times last season and two of those resulted in losses — Oregon and Michigan. Stroud threw for 394 or more yards in all three, nearly 14 above his season average, while averaging three yards per carry.

Compare that with Ohio State’s other 10 games when the offense averaged 207 yards rushing and 6.3 yards per carry, and the path to success seems clear.