No. 6 Cincinnati focuses on Houston amid playoff buzz 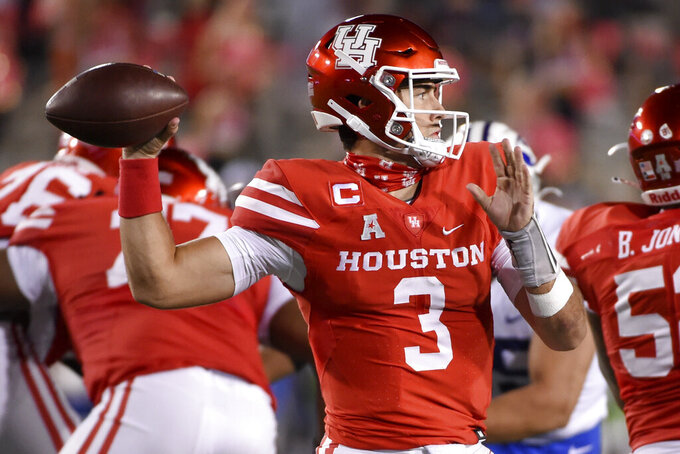 CINCINNATI (AP) — Cincinnati head coach Luke Fickell isn’t insulating his players from the national buzz surrounding the Bearcats program. He believes they are mature enough to handle it.

“It’s not to say it’s the elephant in the room and we don’t talk about it,” Fickell said. “I want our guys to enjoy that stuff, just not too much.”

The Bearcats’ No. 6 ranking is their highest since finishing the 2009 season ranked No. 4 under then-head coach Brian Kelly.

Cincinnati (5-0, 3-0 American Athletic Conference) has an eye on becoming the first non-Power 5 team to break into the College Football Playoff.

“I don’t listen to a lot of those things,” Fickell insists. “That’s trying not to be naïve. I know they see it. I know they hear it."

Fickell raised the caution flags this week for Saturday's game against the Houston Cougars (2-2, 2-1). Last season the banged-up Cougars led 21-17 going into the fourth quarter, but the Bearcats rallied for a 38-23 win.

The Cougars are dealing with some injuries again going into this week’s matchup. But Fickell won’t allow the Bearcats to let their guard down.

“They were struggling a bit last year when we went down to Houston, and they gave us everything we could ask for,” he said.

Cougars quarterback Clayton Tune threw two touchdown passes in last year’s meeting, but the Bearcats kept him in the pocket, prevented him from making plays with his feet, and forced him into three interceptions.

Tune, however, could be without his top playmaker after Marquez Stevenson left last week’s game against Central Florida with an ankle injury. If Stevenson can’t play, junior Bryson Smith — who had three catches for 38 yards in the 44-21 loss to UCF — will take his spot.

“Kind of sucks when your best player goes out after one catch,” Cougars coach Dana Holgorsen said.

Bearcats quarterback Desmond Ridder, meanwhile, accounted for 397 total yards and nine touchdowns in wins over SMU and Memphis. After a slow start, the junior is playing at a high level.

“Things are slowing down in his head,” Fickell said. “Early on, he was pressing and forcing things. He has confidence in his offensive line. That helps him to play a little bit freer.”

Others things to consider ahead of Saturday's game:

Injuries are impacting both teams. In addition to Stevenson, the Cougars also have lost running back Terrell Brown and offensive lineman Patrick Paul to season-ending injuries. The Bearcats could be without top receiver Alec Pierce, cornerback Arquon Bush and tight end Bruno Labelle.

Cincinnati has the luxury of having eight senior starters on defense.

“Strong, athletic, old up front,” Holgorsen said. “Coach Fickell is a really good football coach. All these are his guys. I hope and pray they have me around long enough to talk about all my seniors that have been together.”

Holgorsen is in his second season at Houston while Fickell is in his fourth at Cincinnati.

RUSHING IS THE KEY

Houston needs to establish the run to be successful against Cincinnati, but that may prove to be a challenge. The Cougars average 134 rushing yards per game. The Bearcats are allowing only 97.

IT'S BEEN A WHILE

Cincinnati is the highest ranked conference opponent Houston has faced on the road since the Cougars played third-ranked Texas on Nov. 10, 1984. Houston's last win over a top-10 team on the road came in 2009 at Oklahoma State.