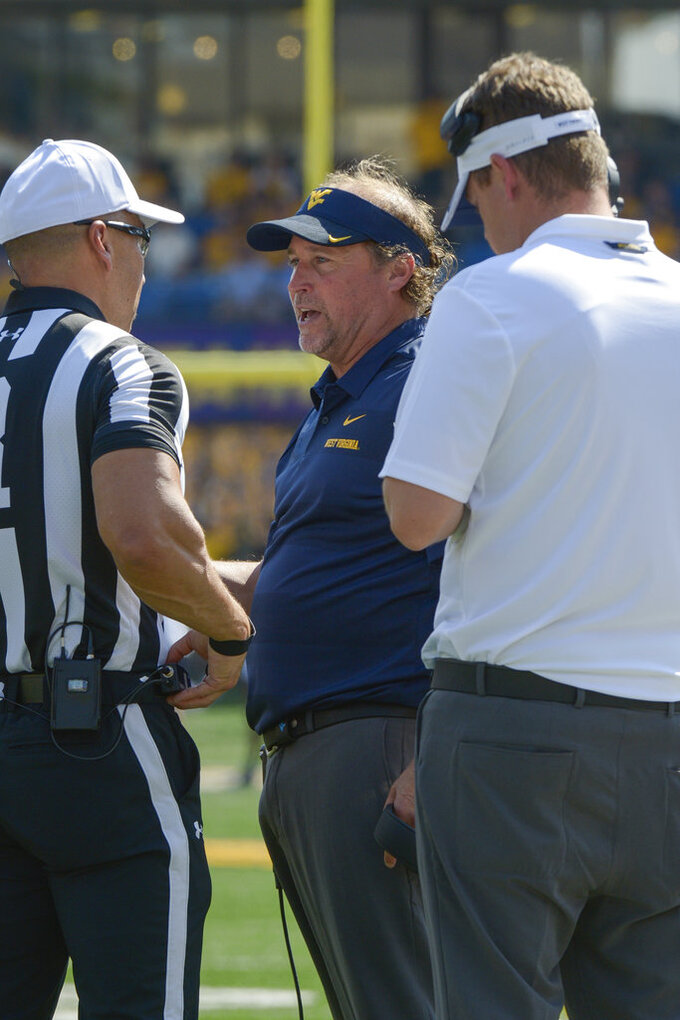 West Virginia coach Dana Holgorsen speaks with an official during the first half of an NCAA college football game against Kansas in Morgantown, W. Va., Saturday Oct. 6, 2018. (AP Photo/Craig Hudson)

MORGANTOWN, W.Va. (AP) — With tens of thousands of people watching, Reese Donahue got down on one knee at midfield and proposed to his longtime girlfriend after West Virginia beat Kansas to move to 5-0.

Life for the Mountaineers' defensive lineman and Sarah Moore (she said yes) is entering an exhilarating chapter.

The Mountaineers (5-0, 3-0 Big 12) are the only undefeated team left in the league after Texas knocked off previously unbeaten Oklahoma. And with it comes the attention building with each week that the Mountaineers, for now, could be the league's flag bearers for the College Football Playoff. But there are plenty of head-to-head matchups left to determine that.

"We have a lot of work to do," Donahue said. "I think we're going to be exactly where we need to be when the end of the season rolls around."

First, West Virginia must survive a schedule in a league it has yet to win since joining in 2012. And November's calendar is brutal. Then there's the league championship game on Dec. 1, if the Mountaineers make it that far.

"Don't ever take a win for granted in the Big 12," coach Dana Holgorsen said. "You enjoy every one of them. We're 5-0 and we know as a team that we've got a lot of things that we need to work on. That's a healthy place to be."

Despite a sloppy 38-22 win over Kansas on Saturday, West Virginia moved up three spots to No. 6 in this week's Associated Press poll . And the Mountaineers have company — Texas improved 10 spots to No. 9, while Oklahoma fell from seventh to No. 11.

West Virginia has yet to play a ranked opponent. Its Sept. 22 game at No. 20 North Carolina State was called off due to Hurricane Florence. The teams West Virginia has faced have a combined record of 11-16 and the next two games are at Iowa State (2-3, 1-2) on Saturday and at home Oct. 25 against Baylor (4-2, 2-1). That gives West Virginia a chance to be 7-0 by the time the first CFP rankings are announced on Oct. 30 .

West Virginia is running out of time to iron out its mistakes. Will Grier threw three red-zone interceptions and a lost fumble Saturday, while the offense struggled mightily in the second half of wins over Texas Tech and Kansas State .

"Nobody plays perfect games," Grier said. "But there's got to be a sense with how good we are, we've got to fix some of these little things and get better moving forward. And we will."

The Mountaineers can only hope for a better finish than the last few times they reached the midpoint of the season undefeated.

In West Virginia's first season after moving from the Big East, Geno Smith was the Heisman Trophy front-runner and led the Mountaineers to a 5-0 start and a No. 5 ranking. West Virginia lost six of its final eight games, a byproduct of a defense that wasn't quite ready for all that scoring in the league.

In 2016, the defense was the reason behind a 6-0 start and a No. 10 ranking. The Mountaineers finished 10-3, saving Holgorsen's job after he started the season on the hot seat.

This time, getting to the Big 12 title game is the focus first.

"They do have a lot of pressure on them to play perfect all the time," said West Virginia offensive coordinator Jake Spavital. "But that's kind of the standard that we've set in that room."