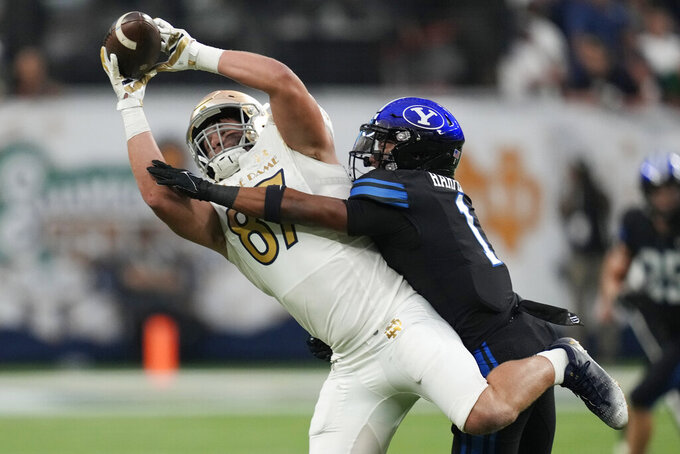 He also called him a freak and a heck of a football player after the junior caught 11 passes for 118 yards and two scores to become the program’s all-time receptions leader for a tight end as Notre Dame won its third straight, beating No. 16 Brigham Young 28-20 on Saturday night.

“The thing you love about Michael Mayer is he’s the hardest worker,” Freeman said. “He’s an unfinished product, but he understands that. He wants to get better. He doesn’t want to be told what he does well, he wants to be told how he can improve and that’s a special player.”

Drew Pyne threw for 262 yards and three touchdowns for the Irish, while running backs Logan Diggs and Audric Estime added a combined 190 yards on the ground.

And while Mayer emerged as the star of the game for the Irish, he refused to take any credit.

The game was the 11th edition of Notre Dame’s annual Shamrock Series and marked the first time the Irish faced a fellow FBS Independent since a 44-6 victory over Army in 2016.

Notre Dame improved to 11-0 all-time in its Shamrock Series, in front of an announced gathering of 62,742, the largest crowd for a college athletic event in Nevada history.

“This was a home game for us, the fans showed out,” Mayer said of the pro-Notre Dame crowd.

Despite playing a bit dinged up from last week’s game against Utah State, BYU (4-2) quarterback Jaren Hall started and finished 9 of 17 for 120 yards passing with two touchdowns. Chris Brooks rushed for 90 yards on 14 carries, including one touchdown, while Kody Epps caught four passes for 100 yards and scored two touchdowns.

“I don’t think he was 100% ... he definitely was banged up,” BYU coach Kalani Sitake said of Hall. “We have to go back and figure out what our game plan was, and what he can do."

Trailing 25-6 early in the second half, the Cougars made things interesting by scoring 14 unanswered points to make it 25-20.

After Brooks cut Notre Dame’s lead to five with a 28-yard touchdown scamper, Cougars linebacker Max Tooley picked off Pyne and put the ball back in the BYU’s hands. But the Cougars couldn’t capitalize and went three-and-out.

“That was big,” Freeman said of the stop. “You can feel a little sense of panic. To get the stop on 4th and 1, that was a huge play.”

The Irish ran 73 offensive plays compared to BYU’s 46, while they outgained the Cougars 496 to 280. It was Notre Dame’s second-highest production on offense this season after it tallied 576 yards in a 45-32 win at North Carolina on Sept. 24. The Irish’s 536 yards per game over the last two games is a 44% increase from the 300.3 yards per game they averaged over their first three games.

Former Notre Dame women’s basketball star Jackie Young was recognized during a timeout in the second quarter. Young, who was an integral part of the Irish’s national championship run in 2018 and who was a gold medalist for USA in 2020, just helped the Las Vegas Aces win the franchise’s first WNBA title last month. Young was also named the league’s Most Improved Player.

BYU: Playing the home of the NFL’s Las Vegas Raiders marked the second time BYU played at Allegiant Stadium after opening the 2021 season with a win over Arizona there. BYU is now 4-3 in NFL Stadiums under coach Kalani Sitake, while the Cougars dropped to 14-5 when playing in Las Vegas.

Notre Dame: Notre Dame finished 11 of 16 on third downs, while its defense held BYU to just 3 of 9 with its third-down conversion attempts.

Notre Dame: Will play the first of back-to-back home games on Saturday, against Stanford.