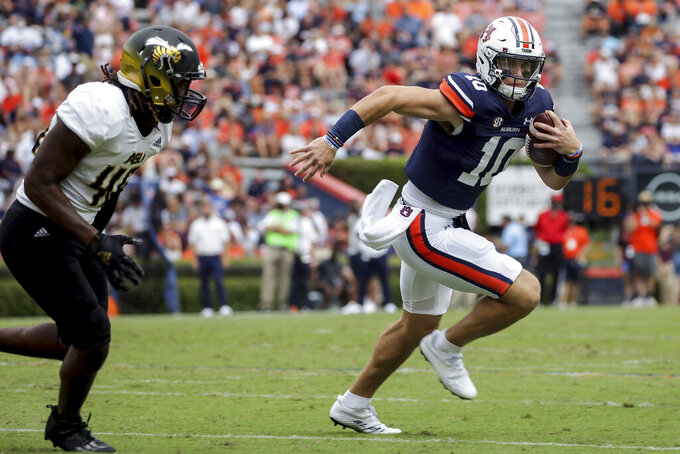 Line: Penn State by 5 1/2, according to FanDuel Sportsbook.

Both teams will look for early bragging rights in the first game of a home-and-home matchup that also could serve as a resume builder for both squads. The Nittany Lions are playing for their seventh straight win while Auburn looks for its third straight in a rare visit to a Big Ten stadium.

Auburn’s running game vs. Penn State’s front seven. The Tigers have a pair of backs who have carved up their first two opponents and could be the key to quieting a raucous crowd. Tank Bigsby and Jarquez Hunter have combined for 43 carries, 531 yards and four touchdowns. They’re running behind a physical offensive line anchored by four seniors.

Auburn: QB Bo Nix. This could be the loudest venue the veteran QB has ever played in and he’ll be doing so against a defense that’s already intercepted four passes. Penn State’s secondary is loaded with handsy players so Nix’s accuracy will need to be on point.

Penn State LB/DE Jesse Luketa: The linebacker-turned-defensive end has wowed coaches and teammates with his ability to effortlessly switch positions when needed to fortify Penn State’s front. His tackling skills will come in handy against Auburn’s multi-headed rushing attack.

Auburn hasn’t played a road Big Ten game since 1931. … The only two meetings in the series have come in bowl games. Penn State won the 1996 Outback Bowl and Auburn won the Capital One Bowl in 2002. … Auburn’s 1,151 yards of total offense are the most in program history to start a season and its 122 points are the fourth-most in an opening two-game span. … Penn State is 23-23 against the SEC. Auburn is 12-10-2 against the Big Ten. … This will be Penn State’s 13th full-stadium whiteout — where fans are encouraged to wear all white.