Penn State looks for a 2-0 start as Ohio visits 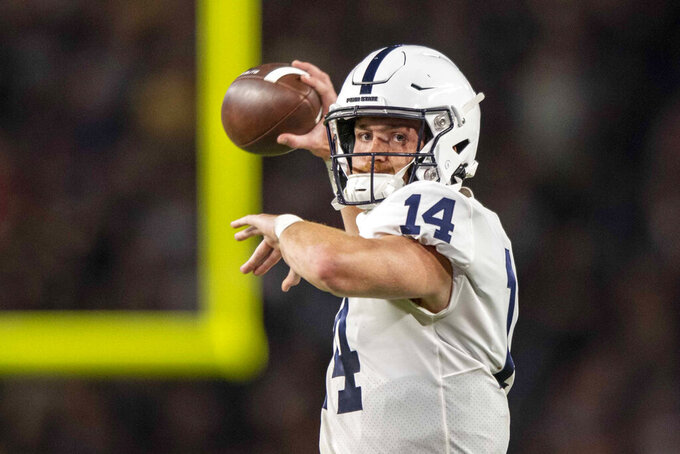 Line: Penn State by 24½, according to FanDuel Sportsbook.

The Nittany Lions showed the kind of resiliency they lacked at times late last season by rallying past Purdue in the final minute of their season-opening win. With a trip to Auburn looming next week, Penn State can ill afford a misstep against a team picked to finish in the bottom half of the MAC's East Division. The Bobcats are coming off a solid victory in their opener, holding off Florida Atlantic 41-38 to open Tim Albin's second season after a 3-9 finish in 2021.

Penn State's secondary against Miami QB Kurtis Rourke. Rourke carved up the Owls for 345 yards passing and four touchdowns in Ohio's opener. He'll face a Penn State defense that surrendered 365 yards passing last week to Purdue's Aidan O'Connell, who dropped back a staggering 62 times but didn't throw a pick and was sacked only twice. If Rourke has time to throw, another shootout could be in the offing.

Ohio: RB Sieh Bangura. Bangura ran for 114 yards against Florida Atlantic, topping his entire 2021 total (93 yards). The Bobcats will need him to be effective again to take some of the pressure off Rourke. Penn State's defense limited Purdue to 61 yards rushing last week, but the Boilermakers were so intent on throwing it that they didn't make a real effort to establish the run.

Penn St: QB Sean Clifford. The Nittany Lions had the full Clifford experience in the opener. He passed for 282 yards, threw for four touchdowns and ran for another but also tossed a pick-6 in the fourth quarter that nearly cost Penn State the game. All that despite leaving briefly with an injury. Clifford is often capable of brilliance and baffling mistakes in the same drive. The Nittany Lions will likely go as far as Clifford can take them in 2022.

Ohio won the last meeting between the schools, a 24-14 stunner at Beaver Stadium on Sept. 1, 2012 behind 324 yards passing and two touchdowns from Tyler Tettleton. ... Penn State is 120-13-1 all-time in home openers and 33-7 at home since 2016. ... The Nittany Lions are 28-3 against current members of the MAC. ... Penn State DB Joey Porter Jr. tied a Big Ten record with six pass break-ups against the Boilermakers. ... Clifford is one of three QBs in Penn State history to start one game in four consecutive seasons, joining Tony Sacca (1988-92) and Zack Mills (2001-04). ... Nittany Lions WR Mitchell Tinsley has at least seven receptions in each of his last six games. ... Penn State WR Brenton Strange averaged 38.5 yards per reception in Week 1.

By Gary B. Graves an hour ago
By Dave Campbell 3 hrs ago
5 hrs ago
By Raul Flores 6 hrs ago
By Aaron Beard 6 hrs ago