Red River more normal for No. 6 Oklahoma and No. 21 Texas 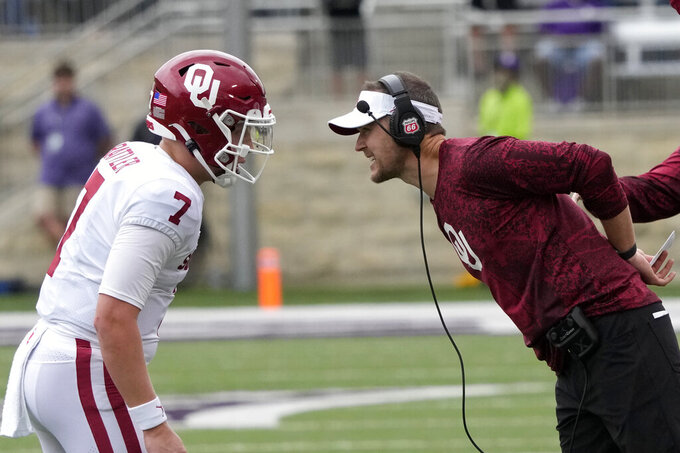 DALLAS (AP) — This is how the second Saturday of October is supposed to be for No. 6 Oklahoma and No. 21 Texas, even though their Red River rivalry won't be a Big 12 game for too much longer.

The Sooners (5-0, 2-0 Big 12) and Longhorns (4-1, 2-0) are both nationally ranked with first place in the Big 12 on the line. The stands should be full again, with fans in crimson and burnt orange split at the 50-yard line. The aroma of food from the bustling state fair midway just outside 92,100-seat Cotton Bowl Stadium will waft inside.

“Excited that we get to get back to the Cotton Bowl with a more normal atmosphere. I missed that in the epic clash last year,” Sooners coach Lincoln Riley said. “We say it every year but I think it can’t go underappreciated. The best parts of this job (are) to get to coach, play and compete in this game.”

When unranked Oklahoma won in four overtimes last October, the crowd was limited to about 24,000 fans, and the State Fair of Texas was shut down for the first time since World War II because of the pandemic. A full house is expected Saturday and the unique atmosphere where the cheering never stops can overwhelm some young players.

“I’m from Arp, Texas, population 900, and you’re going to see that many people just riding in on the bus,” said Texas senior linebacker DeMarvion Overshown, who had a career-high 11 tackles with an interception against Oklahoma last year. “I tell (the first-timers) to enjoy it. It’s a feeling that not a lot of people get to experience, so enjoy the experience, but when we touch the field, it’s time to lock in because we’ve got a job to do.”

Spencer Rattler and the Sooners have a 13-game winning streak that began with that 53-45 victory over the Longhorns. Rattler threw two touchdowns in OT after being on the bench part of the first half because of a poor start.

Texas and Big 12 rushing leader Bijan Robinson have a much shorter but still impressive streak. The Longhorns have scored 160 points while winning three in a row since a loss at Arkansas of the Southeastern Conference, the league the Sooners and Longhorns will join no later than 2025.

“Honestly, I don’t really think the SEC has a whole lot of impact on this game. That’ll happen when it happens,” Riley said. “I don’t know that you could add any more intensity or importance to this game."

THOMPSON AND HIS OU FAMILY

Casey Thompson is a rarity as an Oklahoma kid playing quarterback at Texas. His father, Charles Thompson, played quarterback for the Sooners in 1988-89. But Casey forged his own path, waiting three seasons behind Sam Ehlinger before being named the starter the third game this season.

“It speaks volumes to his own personality. He chose to go where he thought was best for him," Texas coach Steve Sarkisian said. “He wanted to be a Longhorn, through the adversity, through being a backup, not being named the starter. With that perseverance, he was able to get through that because this was his choice.”

BIJAN BY THE NUMBERS

Robinson is getting some Heisman Trophy attention as the nation's second-leading rusher (130.4 yard per game) and with a Big 12-high nine TDs (seven rushing, two receiving). The Sooners have the league's top rushing defense, allowing 79.4 yards per game.

“He jumps off the tape," Oklahoma defensive coordinator Alex Grinch said. "You kind of halfway see from afar as you prepare for your opponents and see the games. You hope when you turn on the video, it’s going to be hype and not real. But in this particular case, it matches.”

Most players look forward to again having the full Red River rivalry experience, even fans banging on the side of the bus in the slow procession through the fairground crowd to get to the stadium.

"Last year it was just a ghost town. You just rolled right up, got off the bus," said Sooners receiver Drake Stoops, who caught a 2-point conversion in the fourth OT.

Riley and Sarkisian both got their 50th career wins last Saturday. Riley is 50-8, with the only Oklahoma coach to get 50 wins faster being Barry Switzer in 56 games. Sarkisian is 4-1 at Texas, after going 34-29 in five seasons at Washington and 12-6 at USC.

Texas kicker Cameron Dicker booted the game-winning field goal in the final seconds to beat the Sooners in 2018, a moment preceded by a wink and a smirk caught by television cameras that quickly went viral on social media. He missed two of his first three field goal attempts of this season, then didn’t get to try any in two lopsided wins before a career-high four field goals last week at TCU.