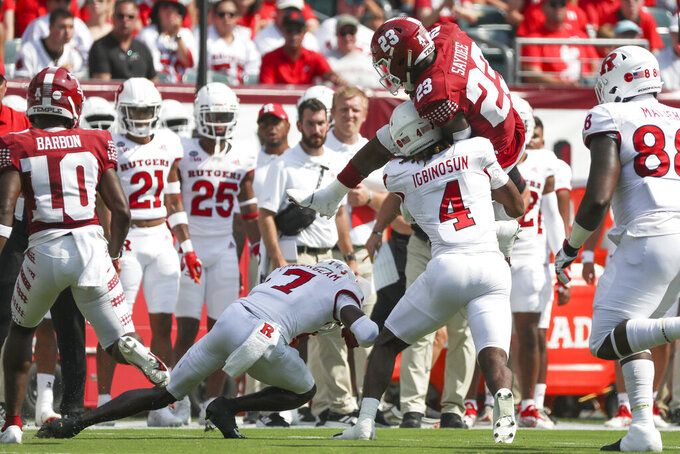 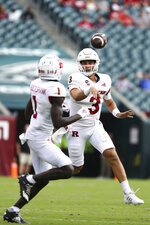 Line: Iowa by 7 1/2, according to FanDuel Sportsbook.

Coming off a 16-14 win over Temple, Rutgers is looking for its first 4-0 start since 2012. To get it, the Scarlet Knights must break a 19-game losing streak at home against Big Ten Conference opponents. Iowa, which beat Nevada 27-0, plays on the road for the first time this season.

This is a game between two good defensive teams with struggling offenses. Field position will be crucial: Tory Taylor (Iowa) and Adam Korsak (Rutgers) present an all-Australian showdown at punter. Taylor leads the Big Ten and ranks third nationally with a 48.3-yeard average. Eleven of his punts have been at least 50 yards and 13 have been downed inside the 20. Korsak has not had a return yard against in 12 attempts, averaging 42.1 yards. Five punts have been downed into the 20.

Iowa: Senior LB Jack Campbell had 10 tackles against Nevada, the second time in three games he has had at least that many. Campbell is second in the Big Ten with 10.3 tackles per game.

Rutgers: Defensive lineman Aaron Lewis had his best game in the win over Temple. The sophomore finished with 11 tackles, including two for losses, and forced a fumble.

Iowa has allowed 13 points in three games, limiting each opponent to less than 160 yards in total offense. ... RB Kaleb Johnson put up the first 100-yard game by an Iowa freshman since 2019 (Tyler Goodson). ... The Scarlet Knights are second nationally and first among Power Five teams allowing an average of just 32.3 yard rushing. The 97 rushing yards permitted are the least for the the Scarlet Knights in the first three games of a season since 1940 (73). ... Evan Simon has been the only healthy scholarship quarterback at practice for Rutgers this week although Gavin Wimsatt and Noah Vedral are listed as day to day. ... Greg Schiano became Rutgers' winningest coach last weekend at Temple with 79. He passed Frank Burns, who had 78 from 1973-83.