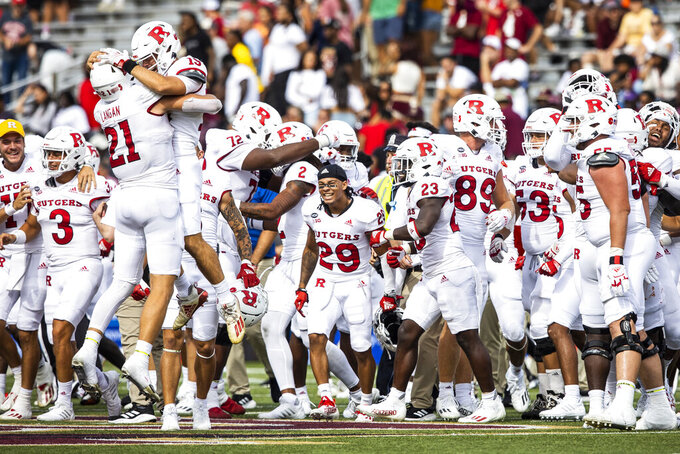 Line: Rutgers by 17 1/2, according to FanDuel Sportsbook.

Rutgers is looking for a sixth straight win against Temple dating back to 2003. The Scarlet Knights are also looking for their second straight 3-0 start before Big Ten play begins next week. The Owls are seeking back-to-back wins under first-year coach Stan Drayton.

Rutgers wins over Boston College and Wagner were keyed by a defense that ranks second in the nation against the run, averaging just 24 yards allowed. The Scarlet Knights, thanks to linebackers Deion Jennings and Tyreem Powell, have also been efficient against the pass with four interceptions (seventh in the country). On the flip side, Temple has been unable to get much going in its two games, generating an average of 105.5 yards on the ground (109th).

Rutgers: One of the biggest questions for the Scarlet Knights involves the situation at quarterback, where sixth-year senior Noah Vedral has missed the first two games after suffering an upper body injury in training camp. Rutgers coach Greg Schiano didn't rule Vedral out, but Gavin Wimsatt and Evan Simon have both seen action in the first two games.

Temple: Owls quarterback E.J. Warner, the son of Pro Football Hall of Fame quarterback Kurt Warner, threw for 173 yards and two touchdowns in relief during Temple's 30-14 win at home against Lafayette. He could get his first start on Saturday in place of Georgia transfer D'Wan Mathis.

Rutgers is 45-20 in nonconference games during Schiano’s two stints as head coach. ... Schiano is looking to record his 79th win at Rutgers, making him the winningest coach in program history. He would pass Frank Burns, who had 78 wins in his 11 seasons (1973-83.) ... Temple recorded three punt blocks in the win over Lafayette, one shy of the NCAA record. ... The Owls have a minus-6 turnover ratio, ranking 130th out of 131 teams in FBS. (Stanford is minus-7.)