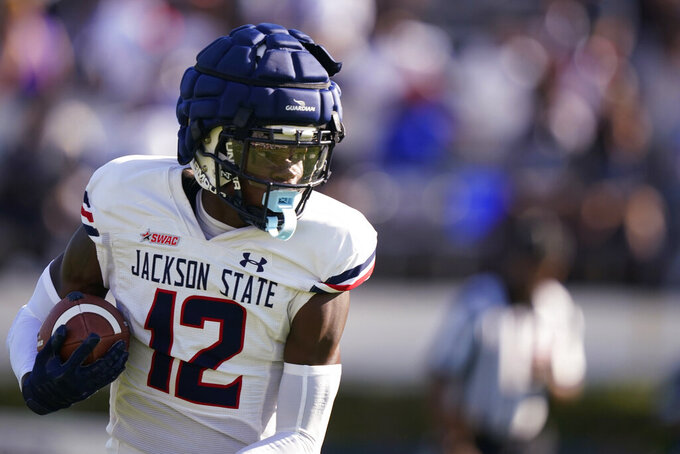 FILE - Travis Hunter (12) catches a pass in the first half of Jackson State's spring football game April 24, 2022, in Jackson, Miss. Hunter was likely the most talked about recruit in the 2022 class, if not before signing day, certainly after when he opted to play at Jackson State. The two-way player from Suwanee, Ga., became the first five-star recruit to sign with an FCS school since the ratings system was developed, and the first to sign with a program in the Historically Black College and University ranks. (AP Photo/Rogelio V. Solis, File)

The Deion Sanders era got off to a great start at Jackson State. Now, the Tigers' focus is on a better finish.

Sanders, the Hall of Famer player-turned coach, led Jackson State to a school-record 11 wins in his first season as head coach and first Southwestern Athletic Conference title since 2007.

The only downside: that 31-10 Celebration Bowl loss to South Carolina State.

“We just came up short last year but hey, it happens,” said quarterback Shedeur Sanders, the coach's son. “Tom Brady loses Super Bowls. It’s not anything to be down about. It’s just a chip on our shoulder and a reminder that we’ve got to finish.”

Sanders & Co. are the favorites to repeat as SWAC champions and Shedeur Sanders is the preseason offensive player of the year. The Tigers landed the nation's top recruit in cornerback/wide receiver Travis Hunter.

Florida A&M, regarded as Jackson State's chief challenger in the East, is led by SWAC defensive player of the year Isaiah Land.

The linebacker won the Buck Buchanan Award as the top defender in FCS after leading the nation with 19 sacks and 25.5 tackles for loss.

The six-team MEAC has been overshadowed by Sanders and the SWAC. But South Carolina State, which beat Jackson State, is favored to win the league again.

Defensive lineman Jeblonski Green is preseason defensive player of the year. He had 38 tackles, 19.5 tackles for loss, 3.5 sacks and an interception despite missing four games with an injury last season.

Deion Sanders shored up his team's weak points with a number of FBS transfers, loading up especially with offensive and defensive linemen and wide receivers. Jackson State was hardly alone in that regard. Alabama A&M landed a whopping 28 transfers altogether, though ex-Miami and South Florida quarterback Jarren Williams opted to quit football in June.

Bubba McDowell, who was promoted to the top job at Prairie View A&M, won a national championship with Miami before spending seven years as an NFL safety.

NOT THAT EDDIE ROBINSON

“I used to get (that question) a lot when I played, especially in the NFL,” Robinson said. He is from Louisiana and does know the Hall of Famer’s family.

Robinson is a former NFL linebacker and an Alabama State alum, who was the SWAC defensive player of the year in 1990 and 1991. A former TV analyst, this is his first coaching gig.

“Everything I’ve done in my life has kind of prepared me for this movement, even though I haven’t actually stood on the sidelines in that capacity,” Robinson said.