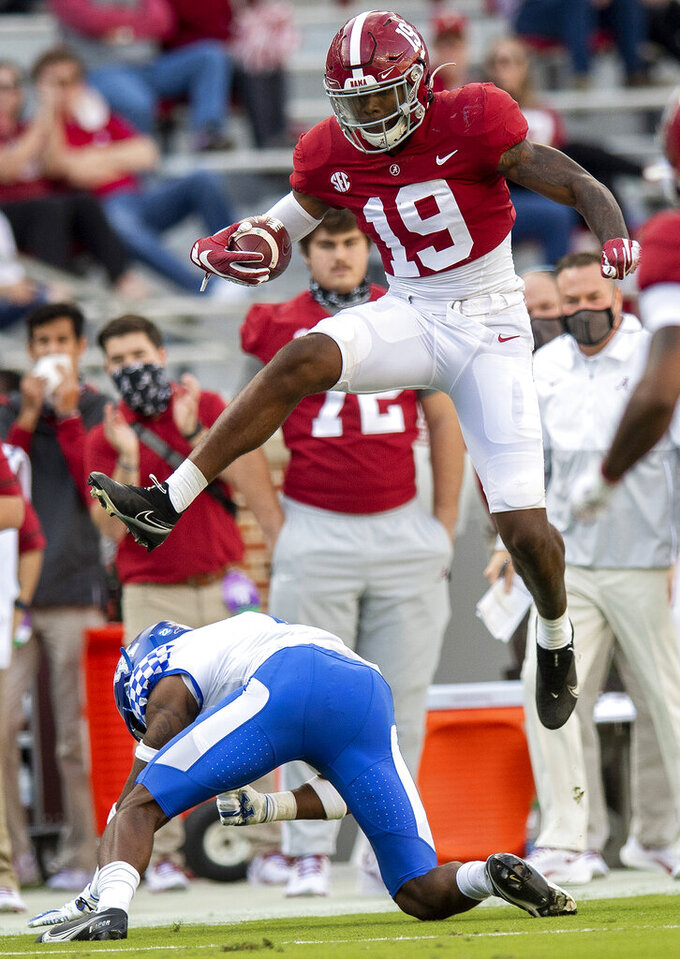 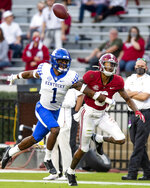 TUSCALOOSA, Ala. (AP) — Alabama didn't quite look like itself at first after an extended period on the sidelines, but it scarcely made a difference on the scoreboard.

Mac Jones passed for 230 yards and two touchdowns and Najee Harris ran for a pair of scores for the Tide (7-0 SEC), both in less than three quarters. A slow start turned into a breezy return from a three-week layoff after LSU was forced to call off last week's scheduled game because of COVID-19 troubles.

The outmanned Wildcats (3-5) were missing a number of key players because of injuries or coronavirus protocol. They were competitive early on the stat sheet, but it didn't hold up particularly long on the scoreboard after they gave up three second-quarter touchdowns.

“I know you’re going to look at the score and say, ‘Man, there’s not a lot of good things.’ But there was,” Kentucky coach Mark Stoops said. "Early in the game, I thought our guys were playing extremely hard, extremely physical.”

Smith broke Amari Cooper's SEC and Alabama record with his 32nd touchdown catch, a 10-yarder from Jones in the second quarter. He added an 18-yarder from freshman backup Bryce Young.

“It’s certainly a blessing to have my name with all the greats that came to the SEC and this school,” Smith said.

Jones completed 16 of 24 passes but also was intercepted at the goal line in a rare mistake. Harris had a career-long 42-yard touchdown run and gained 83 yards on 13 carries.

Kentucky quarterback Terry Wilson passed for just 120 yards and was benched after throwing an interception that Jordan Battle returned 45 yards for a touchdown in the third quarter.

Joey Gatewood and Beau Allen couldn't get anything going, either. The Wildcats gained 121 yards in the first quarter and 60 the rest of the way.

Kentucky: Despite missing all those players, the Wildcats kept it close for a while. They controlled the ball much of the first half, but settled for three field goal tries and converted only one, with a miss and a bad snap. Kentucky couldn't muster much offense after that.

Alabama: Has outscored Mississippi State and Kentucky by a combined 104-3. Didn't have anything close to a flawless first half on either side of the ball, but still took a 28-3 lead into the locker room. Had the ball for just 9:20 in the half.

"The last time I checked you get nothing for time of possession,” Saban said.

Alabama got backups such as Young and freshman tailback Jase McClellan significant playing time. McClellan ran for 99 yards and a late touchdown, moving up the depth chart after Trey Sanders was injured in a car accident.

“It's just good to see the young guys get in there and get a feeling for how it's going to be,” Smith said. “You never know when they're going to be needed.”

Kentucky visits No. 6 Florida next Saturday.

Alabama hosts No. 23 Auburn in the Iron Bowl next Saturday.