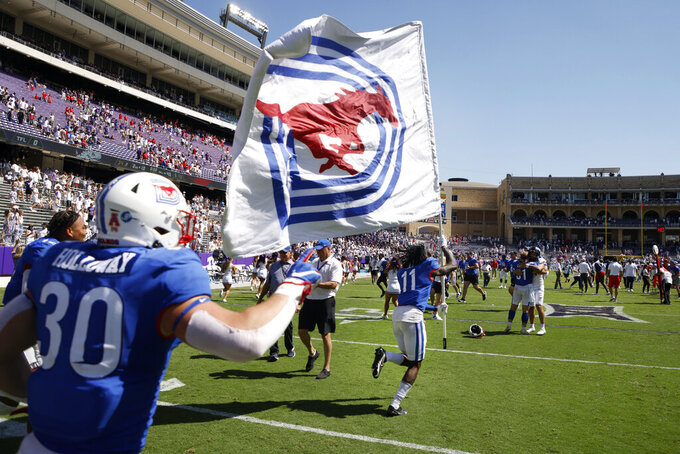 FORT WORTH, Texas (AP) — SMU coach Sonny Dykes reiterated his respect for TCU and apologized for any attempt by his players to plant a flag at midfield after a brief scuffle broke out following the Mustangs' 42-34 victory at the home of the Horned Frogs.

Video showed SMU receiver Rashee Rice running to midfield with a flag displaying the Dallas school's “D” logo before he was ushered away from the TCU logo by opposing players after Saturday's game ended.

A short time later, Mustangs defensive back Brandon Crossley tried unsuccessfully to plant the flag before tossing it. TCU players then pulled the flag off the pole, and a player angrily threw the pole at the ground.

“I think our guys tried to plant the flag at the middle of the field,” Dykes said. “If they did, they shouldn’t have. I’ll talk to them about that. There’s nobody in the world that has more respect for TCU or for (coach) Gary Patterson ... than I do. I apologize for that.”

Rice made headlines the week of the game by saying he thought TCU was afraid to play SMU. The Dallas-Fort Worth rivals didn't play last year because of COVID-19 issues with the Horned Frogs. The schools tried unsuccessfully to reschedule that game.

SMU's victory in the 100th meeting marked consecutive wins for the Mustangs in the series for the first time since 1992-93.