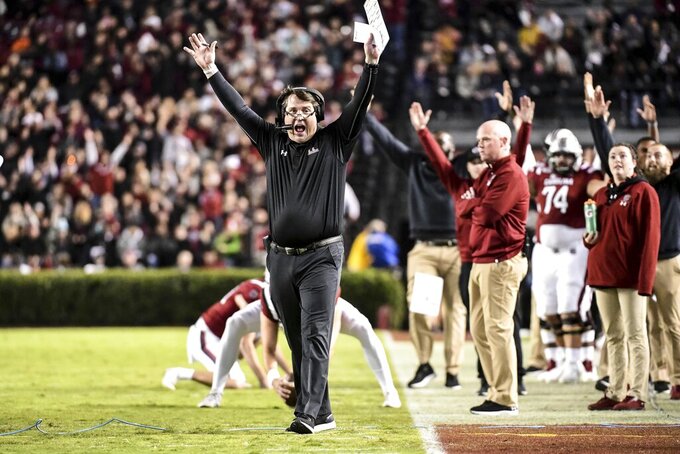 South Carolina head coach Will Muschamp, center, calls for a touchdown against Vanderbilt during the first half of an NCAA college football game Saturday, Nov. 2, 2019, in Columbia, S.C. (AP Photo/Sean Rayford)

Edwards caught a school record 14 passes for a career best 139 yards to lead the Gamecocks (4-5, 3-4 Southeastern) to a 24-7 win that keeps South Carolina's season from skidding into a ditch for now.

The senior shouldered the offensive load for the Gamecocks after receiver Shi Smith tweaked his hamstring this week and did not play.

"He competes every down like it is his last down," South Carolina coach Will Muschamp said. "I've seen that for four years now."

Ryan Hilinski was 24-for-31 for 235 yards for the Gamecocks, including a 25-yard touchdown pass to Edwards midway through the fourth quarter that sealed the win.

"He was hard to tackle," Vanderbilt coach Derek Mason said. "At times we knew the football was coming to him and we still had a hard time getting him down."

Edwards' teammates call him "old man," in part because he is one of the few seniors on the offense and in part because he is a mature, calming presence in the locker room. That's been especially important in an up-and-down year that included an upset of No. 8 Georgia and second half collapses in losses to No. 6 Florida, North Carolina and Tennessee.

"Everybody calls me 'old man.' I haven't turned 21 yet," said Edwards, who also had a 38-yard punt return late in the third quarter that flipped the field a defensive struggle.

Freshman Deshaun Fenwick got his first action of 2019, running 18 times for 102 yards.

Muschamp said Fenwick came to him to discuss a transfer after he didn't play the first two months of the season.

"He stuck it out," Muschamp said. "He's a great example of a guy who handled adversity and fought it a little bit."

The Commodores (2-6, 1-4) lost starting quarterback Riley Neal to injury after the first drive and, with Mo Hasan not playing, turned to third string Deuce Wallace. The junior was 8-for-17 for 30 yards and two interceptions.

The Gamecocks have won 11 straight over Vanderbilt. South Carolina is the only SEC East team that the Commodores never beat this decade.

Vanderbilt: The Commodores now have to win out to get to a second bowl game in a row. That's a tough task with No. 6 Florida and surging Tennessee remaining on the schedule. It might be even tougher with the injuries. Leading receiver Kalija Lipscomb also did not play Saturday. Mason said Lipscomb was dealing with personal issues but was not suspended. He did not elaborate.

South Carolina: The Gamecocks' hopes of making a bowl in each of coach Will Muschamp's four seasons with the program remains. But South Carolina has to find two wins in a finishing stretch with No. 20 Appalachian State, Texas A&M and No. 4 Clemson. One particular bright spot — South Carolina shut out Vanderbilt in the second half. The Gamecocks had been allowing an average of 16 points in the final two quarters.

South Carolina held the Commodores to 189 yards — just 112 of them after Vanderbilt scored a touchdown on its opening drive of the game. It was the Commodores' worst offensive output since gaining just 77 in a 59-0 loss to Alabama in September 2017.

The 189 yards was the least an opponent has gained on the Gamecocks since Florida gained just 183 yards in a crazy 44-11 win over South Carolina in October 2012.

Vanderbilt allowed 440 yards, but Mason said his defense still deserved a lot of credit. They were on the field for 80 plays compared to 50 for South Carolina and stopped the Gamecocks on fourth and goal from the Vanderbilt 2 with just under two minutes left in the game.

"We've got to match that in the other phases," Mason said.

Along with Smith, running back Rico Dowdle missed a second game and offensive lineman Dylan Wonnum missed a fifth game because of injuries. Muschamp thinks all three will be able to play next Saturday.

Wide receiver Josh Vann broke his hand and tight end Nick Muse hurt his knee during the Vanderbilt game. The future of both players is unclear.

Vanderbilt heads to No. 6 Florida on Saturday.