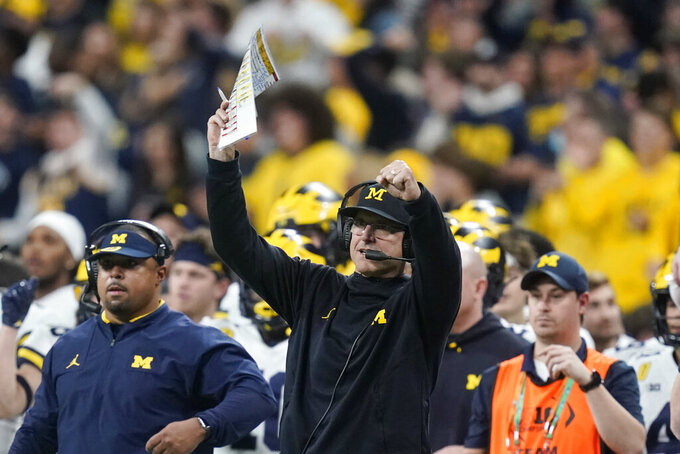 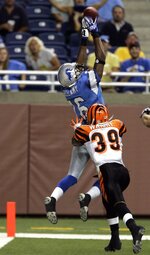 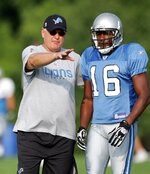 ANN ARBOR, Mich. (AP) — Jim Harbaugh leaned on advice from his brother nearly a year ago when he was looking for a new defensive coordinator at Michigan and ended up hiring Baltimore Ravens linebackers coach Mike Macdonald.

Harbaugh also brought back former Wolverines players Mike Hart and Ron Bellamy as assistants, part of a coaching-staff shakeup after going 2-4 in the pandemic-shortened 2020 season.

Harbaugh seemed to make all the right moves and it helped the No. 2 Wolverines earn a spot in the College Football Playoff and a semifinal matchup with No. 3 Georgia in the Orange Bowl on Friday night.

Macdonald is three-plus decades younger than Don Brown, the man he replaced, and that made an instant and long-lasting impact.

“When he came in January, first impression was like, it's different," defensive tackle Christopher Hinton recalled. “Just his energy. He’s a young guy. He’s 30-some years old. He relates to us."

Macdonald got his start in college coaching as a student assistant at Georgia in 2010 and stayed on the Bulldogs' staff for three more seasons before becoming a defensive intern for Baltimore under head coach John Harbaugh in 2015.

The Bulldogs also will be making some changes on their coaching staff this winter after losing a key assistant.

Oregon hired Kirby Smart's defensive coordinator, Dan Lanning, as head coach two weeks ago but he's staying on staff through the playoff, working with assistant coaches Will Muschamp and Glenn Schumann. Lanning is keeping busy, focusing on Orange Bowl preparations early in the day and then his upcoming Oregon job at night.

“The clarification is both Muschamp and Schumann will be co-coordinators," Smart said when asked how responsibilities will be dispersed, though Lanning said this week he will call the defensive plays on Friday night.

Muschamp, the former head coach at South Carolina and Florida, joined Smart’s staff as a defensive analyst before moving into a full-time role as special teams coordinator in July. He has served as a defensive coordinator at Texas, Auburn, LSU and Valdosta State, where Smart was secondary coach.

Muschamp helped Smart adjust to an unexpected transition on the staff when Georgia announced before the season that special teams coach Scott Cochran was taking time "to prioritize his mental health and well-being.” Cochran, like Smart, worked at Alabama.

Lanning is Smart’s second defensive coordinator to be hired as a head coach. Mel Tucker was hired by Colorado following the 2018 season and became Michigan State’s coach in 2020.

Jim Harbaugh reshaped his Michigan staff after getting a new deal to avoid this season being the last year of his contract. He hired linebackers coach George Helow, defensive backs coach Steve Clinkscale and quarterbacks coach Matt Weiss along with adding Macdonald, Hart and Bellamy.

“This staff does have a lot of youthful energy and it has spread across the building," said Bellamy, who coaches safeties at his alma mater a year after leading West Bloomfield High School to a state championship in his 11th season. “A lot of people mention how young we are, but they should also say how bright and brilliant coaches like Mike Macdonald are, too. He's super smart and you would never know that he's a first-year defensive coordinator. Everyone loves him, and his fiery energy is contagious."

Jim Harbaugh parted ways with some Wolverines assistants after the 2020 season, gave contract extensions to others and retained key members of his staff, including offensive coordinator Josh Gattis, who won the Broyles Award this year as college football's top assistant.

Gattis transformed his scheme in his third season at Michigan. He went from trying to take advantage of speed in space to run-heavy game plans with Hasaan Haskins and Blake Corum that sprinkle in Cade McNamara's play-action passes.

“Most people think we're playing smash-mouth football, but it's a mistake if you're thinking 3 yards and a cloud of dust," Bellamy said. “Coach Gattis has taken the football that Harbaugh grew up with and has married it with a mixture of all the schemes he was a part of at Alabama, Penn State, Vanderbilt and Western Michigan to give us a productive offense that can pick up 50 yards on any play."

Next up is the stingy Georgia defense led by Lanning — for now.