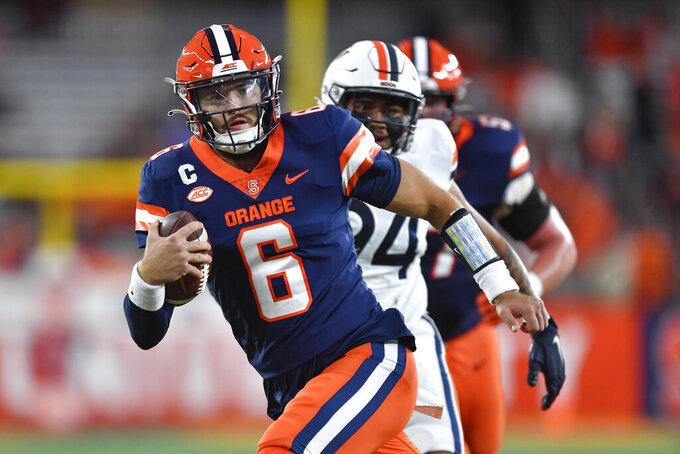 Syracuse quarterback Garrett Shrader (6) runs for a touchdown during the first half of an NCAA college football game against Virginia on Friday, Sept. 23, 2022, in Syracuse, N.Y. (AP Photo/Adrian Kraus)

SYRACUSE, N.Y. (AP) — Andre Szmyt knocked in five field goals, including the 31-yard game-winner with just over a minute left, and Syracuse held off Virginia’s second-half comeback to beat the Cavaliers 22-20 on Friday night.

Syracuse led 16-0 at halftime, but Virginia recorded three second-half touchdowns to take a 20-19 lead with just under six minutes remaining in the game. The Orange (4-0, 2-0 Atlantic Coast Conference) have won their first four for the first time since 2018 and got this one despite committing their first four turnovers of the season.

“We’re really fortunate to come out with the win, we’re excited about that,” Syracuse coach Dino Babers said. “The play was not perfect, that’s for sure. But the record is.”

Syracuse drove to the winning field goal with help from a critical facemask penalty on a third-and-7 play from the Syracuse 41 that was called on a sack of Shrader. That moved the ball into Virginia territory and a 12-yard scramble by Shrader after the Cavaliers' sixth sack moved the Orange into position for the winning kick.

“Once they scored the touchdown, I kind of knew that it might come down to a field goal,” Szmyt said. “And we executed.”

“In the second half, we were able to find some run game,” Cavaliers coach Tony Elliott said. “We were able to find a couple of plays. Man, Brennan on that last touchdown throw, he had pressure off the edge. He stood in there, set his feet and delivered a strike. Those are the type of plays that we need him to make.”

Syracuse responded with a 62-yard drive to the winning kick and Virginia’s final drive resulted in a turnover on downs.

The matchup reunited two of Syacuse’s first-year assistants, Robert Anae and Jason Beck, with their old squad. Anae and Beck coached at Virginia (2-2, 0-1 ACC) for the past five seasons before joining Dino Babers’ staff this offseason.

“We just all came together,” said Virginia linebacker Chico Bennett Jr., who had two tackles for loss. “They’re a good football program. Coach Anae has coached them well. For us, we’ve got some things to work on. Rushing the passer was one of the big things we needed to do. We left something out on the field, but we’re going to get that back.”

Virginia kicker Brendan Farrell missed first-quarter field goal attempts from 51 and 49 yards, respectively. The second miss came after the Cavaliers had taken over at the Orange 37-yard line following a Sean Tucker fumble. For the second straight week, Tucker was unable to find many openings, finishing with 60 yards rushing on 21 attempts.

UVA got back in the game early in the second half when Armstrong pitched to Keytaon Thompson at the 1-yard line for a touchdown. The Cavaliers, trailing 16-6, wanted to attempt a 2-point conversion, but an illegal substitution penalty forced them to kick the extra point instead.

Syracuse’s defense forced two turnovers, the first coming late in the first quarter when Armstrong kept a read option to the right side but ran into his own blocker. Syracuse capitalized by taking a 13-0 lead after a Szmyt field goal. He is 9 of 10 on field goal attempts this season.

Virginia linebacker Nick Jackson was ejected for targeting in the third quarter after a hit on Shrader. Jackson entered the game as the team’s leading tackler. Syracuse defensive back Justin Barron was also called for targeting earlier in the half. Alijah Clark, Terry Lockett and Ja’Had Carter all left the game with injuries for Syracuse.

Virginia: The Cavaliers again struggled offensively, totaling 287 yards and less than 21 points for the third straight game. A year after ranking among the top teams nationally in points per game, Armstrong and Virginia’s offense haven’t been able to match that success under first-year head coach Tony Elliott and offensive coordinator Desmond Kitchings.

Syracuse: Shrader rebounded from a sluggish performance against Purdue, finishing 22 for 33 for 277 passing yards. His go-to target was Oronde Gadsden II, who notched seven catches for 113 yards. Gadsden has emerged over recent games as a key slot receiver, and he recorded another stellar outing after catching the game-winning touchdown with seven seconds left in the game last week.