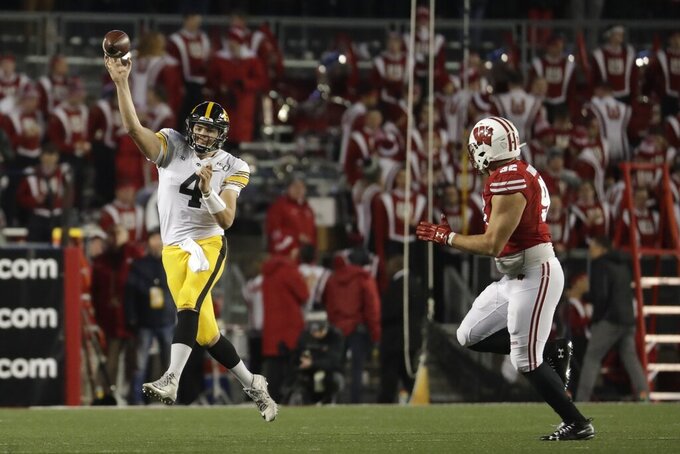 Taylor rushed for 130 of his season-high 250 yards in the fourth quarter, and Danny Davis ran for a touchdown and caught another as No. 16 Wisconsin outlasted No. 18 Iowa 24-22.

Taylor became the first running back this season to rush for more than 100 yards against Iowa as Wisconsin (7-2, 4-2 Big Ten, No. 13 College Football Playoff) held on to the Heartland Trophy, given each year to the winner of this game. The Badgers have beaten Iowa four straight times.

"Jonathan has been great all season, but I think he holds himself to a high standard," teammate Quintez Cephus said. "He wanted to come out here and do what he did today. He told us he was going to be better, and he did it. Props to him."

Taylor's 250 yards on 31 carries are the most ever by a Wisconsin player against Iowa, surpassing the previous high of 216 by Ron Dayne in 1999.

"We wanted it a lot, together as a whole team," Taylor said. "It's essential, it's a Big Ten West game and we have four (games) lined up. So we've got to make sure we're on. It's November and everyone is going to try to be at their best, and you've got to make sure that you're able to play for 60 minutes."

Cephus caught five passes for 94 yards and his fourth touchdown of the season to help Wisconsin stay in contention for the Big Ten West crown.

"It felt good," Davis said. "Getting the chance to contribute to this team, and scoring, it's a big opportunity. I think receivers did a good job of stepping up. Of course, JT (Taylor) went for 250, so, we'll take some of the credit with the blocking game. It was a great game all around."

After a 27-yard touchdown to Cephus from Jack Coan made it 21-6 at the end of the third quarter, the Hawkeyes (6-3, 3-3, No. 18 CFP) outscored the Badgers 16-3 in the fourth but couldn't come all the way back. Iowa quarterback Nate Stanley was stopped short of the goal line on a potential game-tying two-point conversion attempt with 3:12 remaining.

"I saw that it was draw and I was kind of second hat to the draw," Wisconsin outside linebacker Zack Baun said. "The collision that Chris (Orr) had with that dude (Stanley) really symbolizes what this rivalry is: mano (a) mano, strength on strength. Chris from Wisconsin won that one. We said the more physical team would win, and that play in itself kind of resembled that."

Iowa's rally included a nine-play, 75-yard drive capped by a 3-yard touchdown from Stanley to Nico Ragaini that made it 21-13 with just over 14 minutes to play. After Matt Hankins picked off a Coan pass, Keith Duncan's 39-yard field goal cut Wisconsin's lead to 21-16 with 9:27 to play.

"I'm proud of our guys, how they fought and stayed in it when at times it looked like it might get away from us," Iowa coach Kirk Ferentz said. "They just kept fighting and gave us a chance to win in the fourth quarter. Unfortunately, we came up short.

"It's certainly disappointing. It's going to be a tough bus ride home for us."

Iowa: The Hawkeyes entered the day allowing only 10.1 points per game, the lowest average in Ferentz's 21 seasons at Iowa. But the Hawkeyes allowed a season high in points and were outgained 473-295. Iowa fell to 0-3 this season against ranked teams. The Hawkeyes also lost to Michigan and Penn State earlier in the year.

Wisconsin: The Badgers got back on track in the friendly confines of Camp Randall Stadium after back-to-back road losses at Illinois and Ohio State. Wisconsin's defense held Iowa to just 87 yards rushing, marking the seventh time in nine games the Badgers have held their opponent below 100 yards on the ground. Matt Henningsen led the way for the Badgers defensively, recording his third sack of the season.

Iowa could find itself on the outside of the AP Top 25 and CFP rankings next week. Wisconsin positions itself nicely with winnable games against Nebraska and Purdue remaining and a showdown at No. 13 Minnesota (No. 17 CFP) on Nov. 30.

Wisconsin plays at Nebraska on Nov. 16.