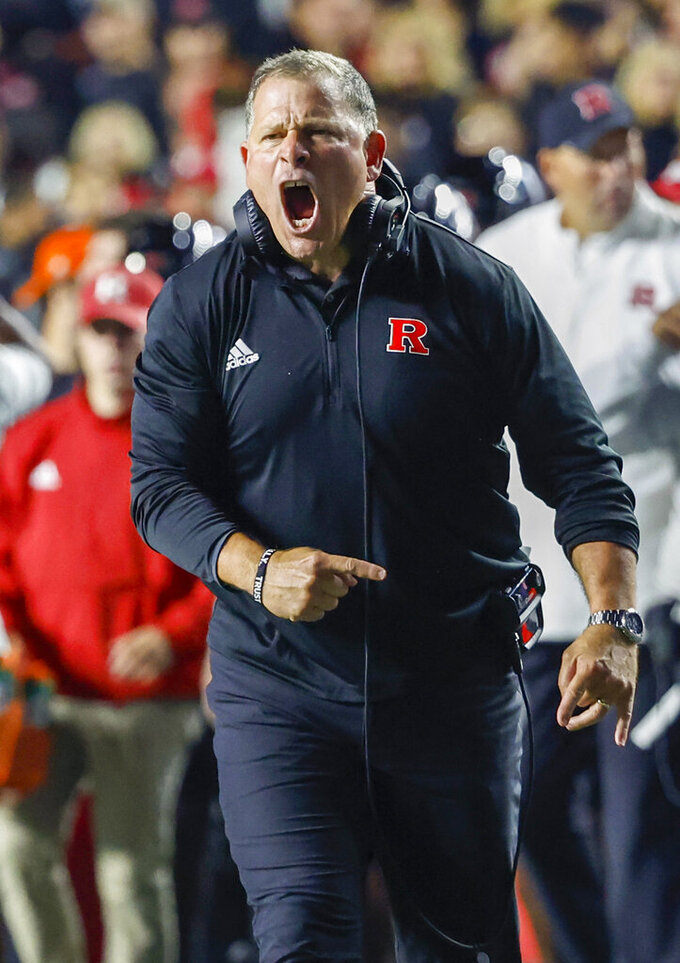 Rutgers coach Greg Schiano reacts to a play during the first half of the team's NCAA college football game against Nebraska, Friday, Oct. 7, 2022, in Piscataway, N.J. (Andrew Mills/NJ Advance Media via AP) 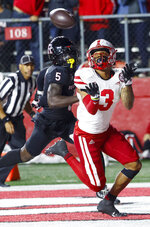 PISCATAWAY, N.J. (AP) — While he may have been the last player to get back on the field after halftime, a banged-up Nebraska quarterback Casey Thompson was center stage in the final 30 minutes.

Thompson threw two touchdowns, including a go-ahead 27-yard touchdown strike to Trey Palmer with 8:54 to play as Nebraska rallied to beat Rutgers 14-13 Friday night, handing the Scarlet Knights their 21st consecutive loss at home to a Big Ten Conference opponent.

Thompson missed two plays on the Cornhuskers' final series of the half after taking a big hit on a pass attempt. He spent most of his time in the locker room taking off his pads and being re-taped. His return to the field was further delayed because he was blocked behind Rutgers (3-3, 0-3) coming back on the field with a 13-0 lead.

“I feel good. We won the game,” said Thompson after Nebraska (3-3, 2-1) won its second straight game. "It’s a lot easier to be sore after a win than a loss. I know I’m going to be sore. We’re going to be sore. It was a physical game on the road. A lot of adversity to push through tonight.”

Safety Myles Farmer set up the game-winning score with an interception and return. Thompson, who also threw a 7-yard TD pass to tight end Travis Vokolek to open the second half, connected on the next play from scrimmage as Palmer made a sliding catch in the end zone.

The Cornhuskers got a shutout from their defense in the final 30 minutes in handing Rutgers its third straight loss.

“We struggled on offense, but the defense gave up some plays," Nebraska interim coach Mickey Joseph said. "We gave up some deep balls early, and we had to settle down and get things together.”

Thompson finished 24 of 36 for 232 yards passing with two TDs and two interceptions.

Farmer made the big play, picking an ill-advised pass by Evan Simon and returning it 17 yards. Simon was intercepted three times

Quarterback Noah Vedral, a Nebraska graduate transfer now in his third season at Rutgers, scored on a 21-yard run on the opening series but he struggled passing, hitting 6 of 15 for 133 yards.

Rutgers coach Greg Schiano said after the game Vedral missed the early part of the season with a hand injury and he has trouble sometimes gripping the ball.

Rutgers Jude McAtamney kicked field goals of 25 and 40 yards, the first set up by a punt block by Max Melton, who also had an interception.

Schiano said his team made too many mistakes with three turnovers and nine penalties. The biggest mistake was an unnecessary roughness penalty on defensive back Kessawn Abraham with just over four minutes to play on a third-down tackle which would have forced a punt. Nebraska ended up keeping the ball and milking down the clock to a minute.

“Whether you win 14-13 or you lose 14-13, still, you have to be the same person,” Schiano said. “And that, I believe, we will be, I do. I believe we have that strength of culture in our locker room. They are very disappointed to the point of grown men crying because they felt and they know we let one slip away today.”

Rutgers' Adam Korsak had a streak of 150 straight punts without a touchback snapped with 12:52 left in the fourth quarter when he had a 51-yard line drive go through the end zone.

Nebraska: After ending a nine-game losing streak against Bowl Subdivision opponents when it beat Indiana, the Huskers have now won two in a row under Joseph and seems to believe they can win more.

Rutgers: The Scarlet Knights need to straighten out their quarterback situation. Vedral started his first game of the season but Schiano used Simon and Johnny Langan, the tight end who carries in short-yardage situations. None of them was impressive. Gavin Wimsatt is injured and still not ready to play.

Nebraska: at Purdue on Oct. 15