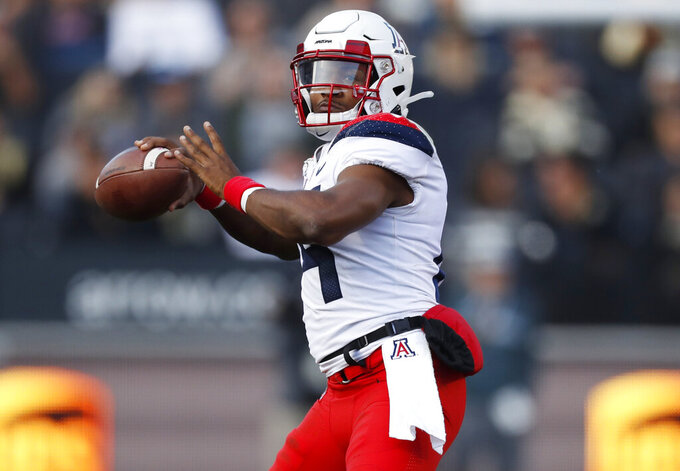 GAME OF THE WEEK: Southern California at No. 9 Notre Dame. The last time we saw the Trojans, they were getting run over by Washington two weeks ago and all the optimism from the upset home win over Utah evaporated. QB Kedon Slovis will be back after missing the Washington game with a concussion so Matt Fink won't get a second straight start. Fink was great stepping in for Slovis against Utah but reality hit against Washington when he threw for just 163 yards and three interceptions. Slovis was nearly flawless in USC's win over Stanford but threw three interceptions in a loss at BYU. It's the third straight game against an AP Top 25 opponent for the Trojans and the toughest challenge of the three.

MATCHUP OF THE WEEK: Washington at Arizona. How real is Arizona's bid to win the Pac-12 South? The Wildcats opened the season with a flop at Hawaii but have won four straight, including last week's 35-30 victory at Colorado. The Wildcats are the only South Division team to remain unbeaten in the conference, but the challenging part of their schedule begins this week with the visit from the Huskies. After facing Washington, the Wildcats still face road trips to USC, Stanford, Oregon and Arizona State, and a home date with Utah. Washington looked lost last week falling 23-13 at Stanford. The Huskies were unable to generate offensive consistency after the first quarter and gave up big plays on defense. If the Huskies have any chance at repeating as Pac-12 champs, they can't stumble in the desert, especially ahead of next week's home matchup with Oregon.

INSIDE THE NUMBERS: California, Stanford and UCLA all have an open weekend. The Cardinal and Bruins face off next Thursday night on The Farm. ... Despite the 17-7 loss to Oregon last week, California has held 13 straight opponents under 25 points, the longest active streak in the country. ... Arizona QB Khalil Tate threw for a career-high 404 yards last week vs. Colorado. Tate has 1,273 yards passing and running, and 13 touchdowns in his past three games. ... Utah QB Tyler Huntley ranks sixth nationally in completion percentage at 74.6%. ... Utah is one of four teams nationally that has yet to throw an interception. ... Oregon State's 48 points last week vs. UCLA were its most in a conference game since 2013. ... Oregon State WR Isaiah Hodgins ranks second nationally averaging 8.6 receptions per game.

PLAYER TO WATCH: It's not a player but a coach. Or coaches in this case. Washington State defensive coordinator Tracy Claeys abruptly resigned during the Cougars' bye week. It hadn't been a good month for Washington State after losing 67-63 to UCLA and getting rolled 31-13 the following week by Utah. Washington State coach Mike Leach inserted Roc Bellantoni and Darcel McBath to run the defense on an interim basis. Their first test will be Arizona State freshman QB Jayden Daniels and RB Eno Benjamin. The 18th-ranked Sun Devils are 4-1 but averaging just 22.8 points per game on offense. The Cougars are giving up 30.6 points per game and only Colorado and UCLA are worse.

UPSET WATCH: Colorado at No. 13 Oregon. The Ducks can't afford a stumble ahead of next week's trip to Seattle for a showdown with Washington that could serve as Oregon's biggest obstacle to winning the Pac-12 North. The Ducks have held four straight opponents to single-digit points for the first time since 1960, including a 17-7 win over California last week. But Colorado is already 2-0 against ranked opponents this season and scoring points hasn't been the problem. The Buffaloes have scored at least 30 points in four of five games. Colorado is also 2-0 away from Folsom Field.