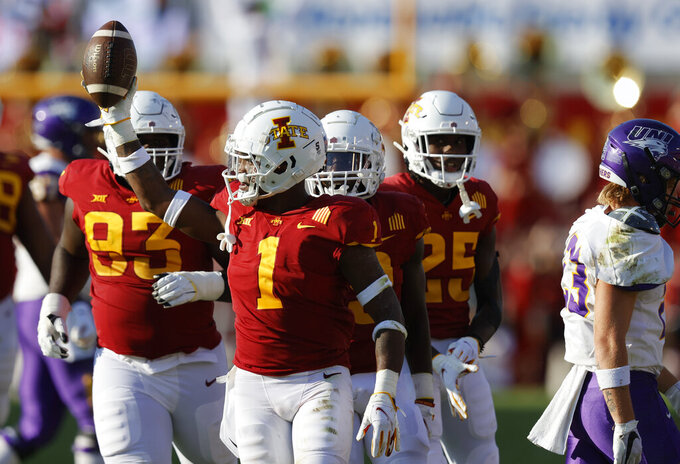 AMES, Iowa (AP) — The last two games between Iowa and Iowa State have produced a total of four touchdowns and 51 points.

The Hawkeyes and Cyclones get after it on defense, guided by veteran coordinators whose careers crossed early on and then took very different paths.

Iowa State's Jon Heacock, 61, has worked as an assistant at eight colleges over 38 years in coaching. In his sixth season with the Cyclones, this is the longest Heacock has ever held one job.

Iowa's Phil Parker, 58, had had two full-time jobs since getting into the business in 1987. He spent 11 seasons at Toledo —- thanks in part to a decision by Heacock — and then moved to Iowa in 1999 and has been working for Kirk Ferentz and the Hawkeyes ever since.

When No. 10 Iowa visits No. 9 Iowa State on Saturday in the first Cy-Hawk game ever to feature two ranked teams and the biggest home game the Cyclones have ever played, it will be a matchup of two longtime assistant coaches who have quietly become among the best defensive coordinators in the country.

“I guess we both are very similar in how we grew up,” Parker said Thursday. “It's funny, if he wouldn't have took the (graduate assistant) job in ‘88 with Michigan, I wouldn’t have gotten the job at Toledo.”

Iowa State coach Matt Campbell hired Heacock to be his defensive coordinator when he was still at Toldeo in 2014. The two had known each other for years. Campbell was in his early 30s, one of the youngest head coaches in major college football, and was looking for a veteran presence on his staff.

After the 2015 season, Campbell took the Iowa State job and pleaded for Heacock to come along. Heacock loved working for Campbell, but was hoping not to move his family again, especially with his daughter going into her senior year of high school.

He decided to follow Campbell, but his wife and daughter stayed in Ohio for a year.

Heacock brought to the Big 12 a 4-3 scheme he had been using for years. A few weeks into his second season at Iowa State, he scrapped it. Iowa State didn't have the personnel to make it work against Big 12 spread offenses.

To get Iowa State's best players on the field, Heacock and the staff switched to a 3-3-5 look that puts a premium on speed and versatility.

“It was really impressive if you knew he had to do it in a week,” Parker said of Heacock's midseason transformation.

Suddenly, Heacock has become one of the most sought out coaches in college football. Ohio State and Clemson are among the schools that have sent staffers to Ames to learn about Iowa State's defense. Even Nick Saban asked Heacock to meet with Crimson Tide defensive staff.

Last Monday, during the Mississippi-Louisville game, ESPN's announcers talked about how the Rebels went to Iowa State this past offseason looking for ideas, mentioning Heacock as Ole Miss was smothering the Cardinals.

“I’m thankful and grateful that we are getting some attention,” Heacock said. “I think our kids deserve that."

Parker's defense is more like what Heacock used to run: a four-man front, with quarters coverage —- basically, four defensive backs splitting the field into fourths.

While the Cyclones frequently use linebackers and defensive backs to pressure the quarterback from all angles, the Hawkeyes rarely blitz. It's all about big-play prevention for Iowa.

Parker said that over the last eight years he has been tracking it, Iowa has allowed an average of about 14 points per game when it holds an opponent to two or fewer gains of 25 yards. In games the Hawkeyes give up three or more 25-yard plays, the points per game doubles.

Parker’s philosophy: keep it simple for the players.

“You never want to give up a big explosive play because of a mental error,” he said.

Iowa State was without All-America tight end Charlie Kolar (lower body injury) last week in a tight victory against Northern Iowa, but hopes to have him back for the Hawkeyes.

The Cyclones are deep at tight end with Chase Allen and Easton Dean behind Kolar, but they're also at their best when they can put two or even three of them on the field at the same time.

“Certainly, there's guys that did a great job, kind of stepped up,” offensive coordinator Tom Manning said. “I think it's anytime you don't have one of your better players on the football field, it's a little bit harder. Maybe you're having the guys do things they don't traditionally do.”

Iowa has won five straight in the series and has not committed a turnover during the last four games against the Cyclones, covering Campbell's time in Ames.